Motorola’s finally pulled the curtains off its new Moto Z and Moto Z Force smartphones, showing off its range of heavily-leaked Moto Mods magnetic back plates as well. Modularity is the biggest take away from the new launches, perhaps signaling a future where custom smartphones are commonplace.

The Moto Mods are easily the most fascinating thing to come out of the unveiling, presenting an endless list of possibilities for modification. These plates simply have to be snapped on to the back of the Moto Z or Moto Z Force to get them running. They connect magnetically via the 16 dots seen on the phones rear surface. 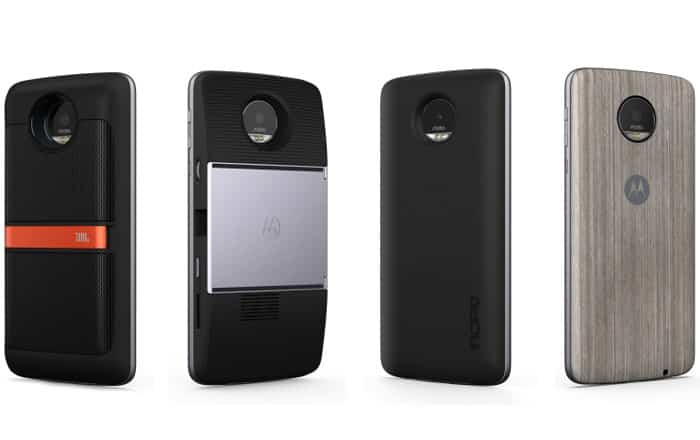 The Lenovo-owned Motorola and its partners have come out with a couple right now. The JBL SoundBoost Mod lets you blast music and adds to the handset’s battery life, while the cool Insta-Share Projector Mod allows you to project the phone’s display onto a 70-inch surface. There’s also a neat 2200mAh Power Pack cover to deliver 22 hours of battery life and a lineup of Style Shells made out of materials like wood and leather.

Moving on to the handset side of the equation, the new Moto Z and Z Force offer a similar set of specs. Notable differences include the fact that the latter has a ShatterShield protected screen, a 3000mAh battery, and a 21MP rear camera. Both have sacrificed the 3.5mm headphone jack, though Motorola is trying to placate people by including a USB Type-C to 3.5mm adapter in the box.

A quick look at the specifications of the Motorola Moto Z:

The Motorola Moto Z and Moto Z Force will hit international markets this September. The two will be sold as the Droid Edition in the US as Verizon-exclusive offerings this summer. Price details will likely be announced closer to the handsets release.