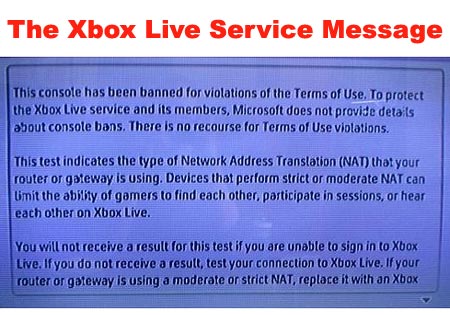 Microsoft has begun levying a ban on all modified units from Xbox Live, describing the move as “an important part of our efforts to try and maintain a fair gaming environment for the large majority of gamers that play by the rules”.

The basic reasons behind gamers to modify their consoles is for avoiding region protection, make use of homepage applications or pirated software or to gain an advantage over their online competition.

Keeping this in mind, Microsoft’s post says that users who modify their Xbox 360 consoles will be banned from Xbox Live on a console rather than account basis, leaving those who choose to modify their systems free to access the online service via alternative consoles. Anyone whose modified console tries to connect to live will now receive an error (“Status Code: Z: 8015 – 190D”).

“These users will not have their account automatically banned from Live, but they will no longer be able to access the service from the console they modified,” Microsoft said.

The Redmond-based company has “a no tolerance policy towards inappropriate behavior like hacking or cheating”, and believes that “this topic is more important than ever given the recent release of the Halo 3 beta”.

“We have stated in the past that customers can only enjoy access to the Xbox Live community through the use of a genuine, unmodified, Xbox console and we will continue to enforce this rule to ensure the integrity of our service, the protection of our partners and the benefits of our users,” a statement on the global community Gamerscoreblog concluded.

Microsoft instigated a similar crackdown on modified Xbox consoles back in 2004 preceding the release of Halo 2.

The existing Xbox 360 modchips concentrate on firmware hacks for the Hitachi-LG and Toshiba-Samsung DVD drives that ship in Xbox 360s, and posts on Xbox-Scene.com – a hub of Xbox 360 modification – suggest that newer versions of the modifications with added security precautions are still being detected, so a running battle between coders in the days and months ahead seems likely.