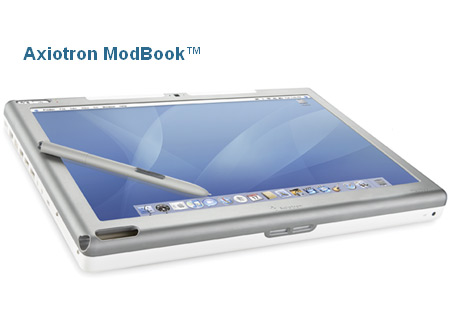 If you thought that Apple’s MacBook Air laptop was notable, then read on, because here is a product that will beat Apple’s newest and slimmest Mac offering. Axiotron had showcased its Mac-based tablet PC called the Modbook at MacWorld 2008. The company claims it to be the world’s first tablet computer to run on the Mac OS.

Axiotron’s Modbook is a slate-style tablet that sports a Wacom pen-enabled display. It offers 512 levels of pen pressure sensitivity, which happens to be twice that of any tablet PC on the market.

The Modbook has a widescreen display of 13.3-inches. It thus offers wider viewing angles and a higher contrast ratio, resulting in darker blacks and more vivid saturated colors, and at the same time maintains the same resolution and aspect ratio of the original MacBook display.

Further it integrates the Apple MacBook PC’s user-friendliness into a very smart design. Lucky Macworld visitors got a chance to play around with the Modbook, and they were impressed by the fast, accurate and intuitive user experience.

The Modbook’s top shell and interior display frame are made from magnesium alloy, lending a rugged feel, while the triple layer of metal plating offers a scratch resistant and pleasant to touch surface

Further Axiotron’s Modbook also features a built-in iSight camera as well as a built-in GPS. It comes standard with an Axiotron Digitizer Pen that features two programmable side buttons and a digital eraser. It also comes with 3 types of replaceable pen tips.

The Axiotron Modbook carries a price starting at $2,290 and comes with a one-year limited hardware warranty. Further, if you order your Modbook before February 29, 2008, you’ll get an extra Axiotron Digitizer Pen and replaceable pen tips.