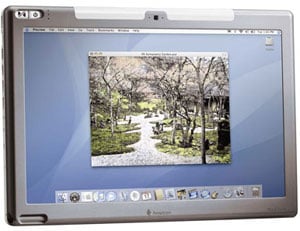 While there have been speculations of Apple designing the tablet version of its MacBook laptops at MacWorld, there’s already a company that has gone ahead of Apple.

On Monday, El Segundo, Calif.-based Axiotron introduced the “ModBook” at the Macworld Conference & Expo in San Francisco. ModBook is basically a modified MacBook laptop with a new 13.3″ LCD and the addition of true pen input and optional GPS functionality.

“Built for mobile users, artists, students, medical practitioners and professionals, the Axiotron ModBook enables its user to draw and write directly on the screen, while the handwriting recognition built into Mac OS X Tiger not only turns hand scribbles into text in every application, but also provides extended control of the system through gesture recognition,” said president of Axiotron, Andreas Haas. “If your favored input device is the pen, then this is the Mac tablet solution for you.”

The combo CD/DVD drive shipped with the unit along with the iSight video camera enabling videoconferencing have been retained in the modified version of the unit aswell. Integrated support for handwriting recognition within OS X will be used for input.

Since several years, talks of Apple developing a tablet PC have been in the air, and the company has filed for a design trademark in Europe for such a device. However, no such thing has seen the light of the day.

Other World Computing would be the exclusive distributor of the device in the United States, and it is available for order immediately online beginning at $2,279. OWC would also bundle a one year warranty on the unit, expandable to three years.

As an introductory special, OWC said it would make available the base unit with the GPS add-on for $2,199 through January 31st.

Axiotron engineers and OWC product specialists will be displaying the Axiotron ModBook for hands-on trials at the Other World Computing booth #S2218 throughout the Macworld Conference & Expo.