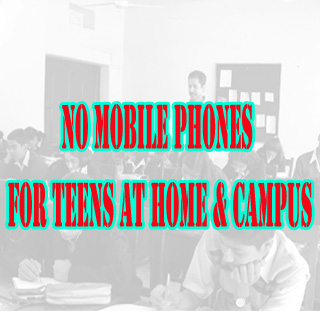 It’s good to be tech savvy and great to own the best and the latest gizmos, but somewhere a line’s got to be drawn, especially if you are too young. Well, I have seen 15-year-olds with communicators, PDAs and what not. Though parents may maintain that this helps their child to be in constant touch with them, but let’s face it, their kid does not keep it for the same purpose. For him the device is more of a fashion statement, perhaps also an addiction more than just a need. And little does he know the repercussions on his health and his parents’ wallets of course. But somewhere things may be changing. Read on to know more on what we are speaking about.

The government of Karnataka, India has banned the sale of mobile phones to children who are aged below 16-years.

The main reason cited behind this significant step is because it has been observed that these children who are constantly glued to their mobile phones are having an adverse effect on their health. The Karnataka Government will be directing traders to not sell mobile phones who are under 16 years-of-age.

In addition, mobile phones have also been banned in schools and colleges for students and institutions up to second-year pre-university, by the education department.

Though primary and secondary education minister Basavaraj S Horatti and health minister R Ashok has stated that the school managements and parents would be responsible for any lapses, they themselves have not chalked out a concrete plan on the way they are going to execute the restrictions on the sale of mobile phones.

“The government is serious on banning the sale of cellphones. We will seek legal opinion to make this rule stringent,” Horatti maintained. Meanwhile, a circular to this effect is expected to be issued in a few days. The rules and points mentioned in this circular will be applicable for all state, central and private-run educational institutions across Karnataka.

Horatti further added that mobile phones were becoming a menace on the premises of educational institutions. Teachers were increasingly complaining about students playing with their phones, listening to music and receiving calls in classrooms at the time of lectures.

According to R Ashok, parents should dissuade their under-aged children from using mobile phones at home too, as it could lead to cancer, brain disorders and adverse impact on nervous system.

However according to doctors like Dr Bapsy, director of Kidwai Institute of Oncology, till now there is no published research in any well-known journal that states that the usage of mobile phones can lead to such health hazards.

Shankar B Madikeri, an ENT specialist, said some studies show radiation could cause problem for the brain development. “But there is no concrete evidence that it damages the ear,” he said.

Well, no matter what the reason be, educational or health, if this rule is implemented it’s sure to cause a rage amidst the student community. But somewhere we do feel that deep down this implementation makes a lot of sense.