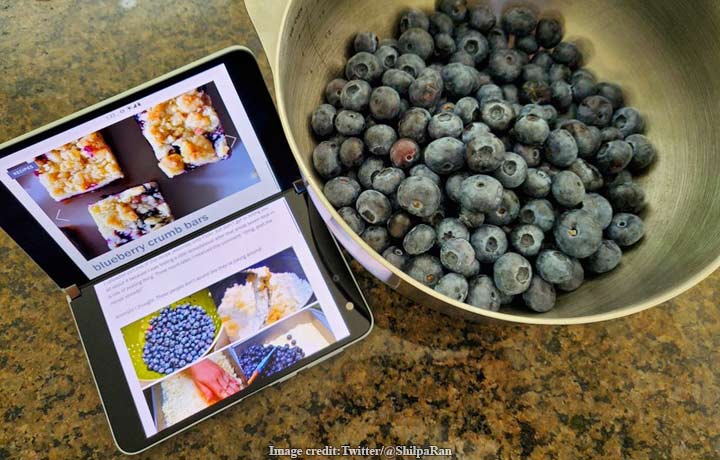 After CEO Satya Nadella, Microsoft’s head of mobile and cross-device experiences Shilpa Ranganathan has shared an image of the upcoming foldable device Surface Duo on Twitter.

In her tweet, the upcoming foldable smartphone can be seen on the table with a recipe open on it.

With this new development, one can expect that launch is near.

The company back in October showcased the foldable smartphone Surface Duo.

Nadella has also been spotted using the device at a public place.

The tech giant recently submitted the device to the US Federal Communications Commission (FCC), indicating work on the hardware has been finished.

The foldable smartphone is at the end of its testing phase and could possibly become available in late August or early September.

Surface Duo is expected to come with mid-range specs, including the Qualcomm Snapdragon 855 SoC, 6GB RAM, and either 64GB or 256GB of storage.

The device will also feature a single 11MP camera sensor above the right display that will be used for both front and rear-facing photos and videos and will be powered by Snapdragon 855 processor, 6GB RAM/64GB or 256GB storage options.

Surface Duo will come with a 3460mAh battery and feature USB-C fast charging.