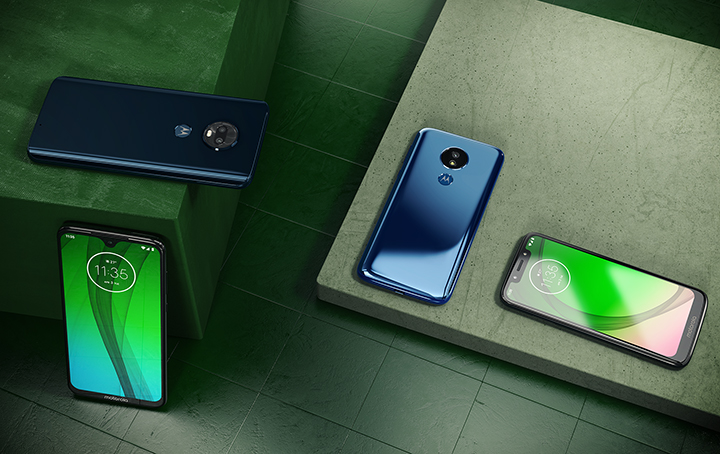 Lenovo-owned Motorola has officially unveiled its G7 series which is its line-up of budget phones for 2019. The G7 family includes Moto G7, Moto G7 Play, Moto G7 Plus and Moto G7 Power that are powered by Qualcomm’s Snapdragon 632 chipset.

This processor is ideal for these mid-range handsets which all come with Android Pie pre-installed.

Worth noting upfront is that the Moto G7 Series isn’t launching in the US right away – it’s coming to international markets first, with stateside availability to follow this spring at Amazon, Best Buy, B&H Photo, Walmart, and a range of carriers, including Google Fi, T-Mobile, and Verizon Wireless, the Venture Beat reported late on Thursday.

The G7 Plus (costs 269 pounds) features a 6.2-inch FHD+ screen, a tear-drop notch and Gorilla Glass back.

It comes with a huge camera upgrade – a 16MP+5MP dual camera set-up with optical image stabilisation (OIS) and a 12MP front-facing camera for selfies.

The Moto G7 Plus would be launched in regions like Brazil and Mexico, with Europe to follow in mid-February and Australia and Latin America in the coming months.

It is essentially a beefed-up version of the Moto G7, and dubbed as the Moto G7 Plus.

The Moto G7 features contoured Gorilla Glass body, tiny bezels, and a rounded teardrop-shaped cut out at the top.

It has a 6.2-inch Full HD+ LCD screen with a scratch-resistant Corning Gorilla Glass.

The Moto G7 Play is the most affordable of the new G Series family and is a tad lighter and more compact than its predecessor.

It has an all-plastic body, a 5.7-inch screen, shielded by a water-repellent P2i nano coating.

The Moto G7 Power comes with a hefty 5,000mAh battery, thus, promising 2.5 days of life on a single charge.

The company’s proprietary TurboPower charging means users can effectively top up the battery to give nine additional hours of use in just 15 minutes of charge.

The G7 Power is splash-proof and has a wide eyebrow-style notch on its 6.2-inch display.

It has a finish that Motorola calls “glass polymer” that looks like glass, but is made out of plastic.