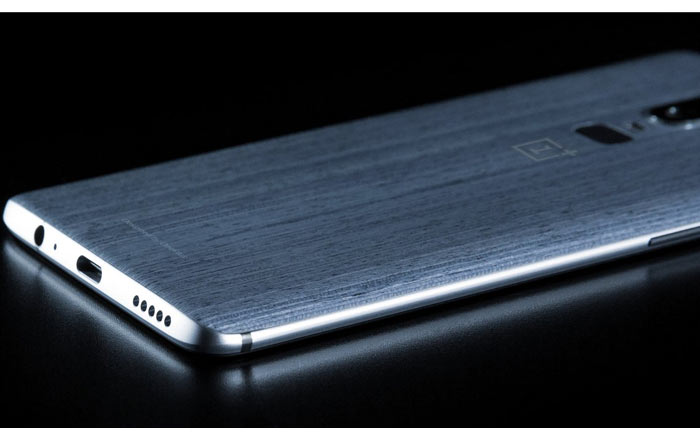 The OnePlus 6 has been leaking out on a regular basis now, with reports painting a fairly complete portrait of what the handset is going to look like. Here to throw a surprise into the midst of all this is frequent tipster Evan Blass with a new photo of the device.

Blass’ image features a textured wooden back in grey. It’s not entirely clear if this is just a skin applied on top of the regular glass back or a new cover entirely. It’s possible the rear will be swappable. There’s also a chance it could be a special edition OnePlus 6 that will cost more.

The words “Designed by OnePlus” can be seen towards the bottom, so the grippy cover is likely an official one and not a third-party accessory. A 3.5mm headphone jack can be spotted as well, good news for anyone worried that the company would axe the port in line with others.

There’s also a USB Type-C slot and speaker grille. The middle portion of the back makes room for dual cameras which have been vertically aligned with the fingerprint scanner. Rumors claim that the OnePlus 6 will sport a 20MP f/1.7 + 16MP f/1.7 configuration at the rear and a 20MP lens up front.

The leak doesn’t have an accompanying image of the front, but it’s widely believed that OnePlus is going to look just like the Oppo R15. There have already been a couple of leaks showing off a notch design, so fans will have no choice but to embrace the iPhone X-inspired change.