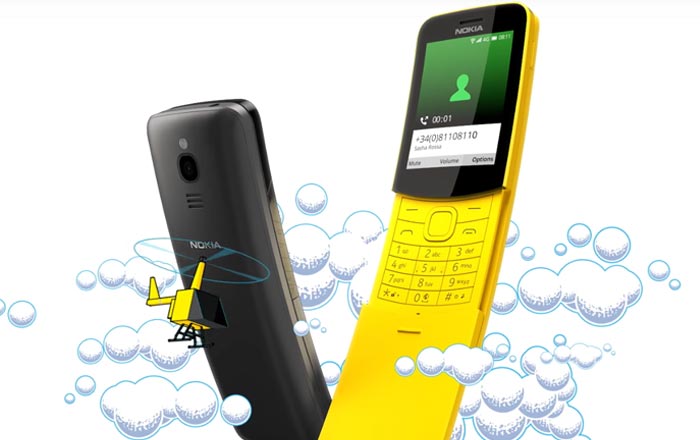 The Nokia 8110 4G has finally made its way to India, months after getting announced at the MWC 2018 in February. The handset was announced for the Indian market earlier this month and it’s now up for sale.

Popularly known as the Matrix-famous “Banana phone,” the Nokia 8110 4G will be sold in yellow and black priced at Rs 5999. You can head to Nokia’s site or various online/offline shops to purchase it. Amazon India has listed the device, but is vending it at Rs 6799. The stock is probably from a third-party seller, hence the hike.

HMD Global had announced a few offers for the Nokia handset at the time of its launch such as a Reliance Jio deal that would grant users up to 544GB of 4G data. This can’t be seen on the brand’s website at the moment, but it might get updated with more details later.

The Nokia 8110 4G is pretty much the same as the classic ‘dumb’ device of yesteryear, except it has 4G support and runs KaiOS. This is the same software which runs through the veins of the JioPhone and JioPhone 2.

One advantage to waiting for so long to introduce the Nokia 8110 4G in India is that WhatsApp has made its debut on KaiOS, at least in the JioPhone pair. The brand’s chief product officer, Juho Sarvikas, had tweeted about this news back in July 2018 with the caption “Oh look, WhatsApp on KaiOS! Looking forward to going bananas!”

Based on this tweet, Nokia might be working on a WhatsApp build for its feature phones as well. Gmail and Outlook are already onboard, as well as the classic Snake game. MobilityArena reports that HMD Global pushed out an update back in August 2018 which introduced Google apps like YouTube, Google Maps, and Google Assistant to the mix.