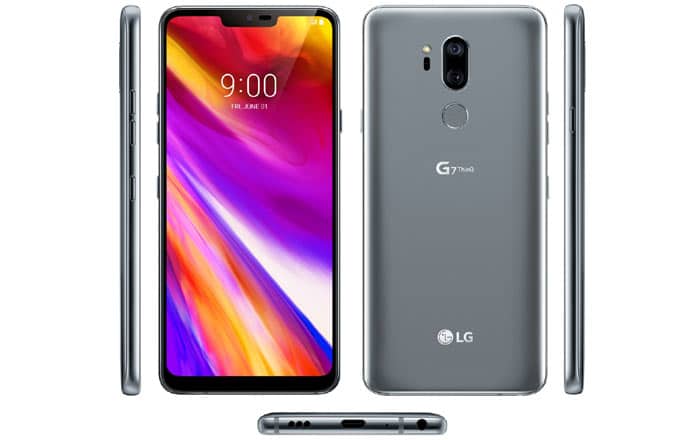 The LG G7 ThinQ is all set to arrive in New York on May 2 and Seoul on May 3 as the brand’s much delayed flagship phone. Frequent tipster Evan Blass has now taken to Twitter to give a sneak preview of what to expect from the launch, leaking a photo of the phone which depicts it from all angles.

As suspected, the G7 ThinQ looks like a hybrid of the iPhone X and Samsung Galaxy S9. The front is clearly inspired by both, featuring a notch design and a curved chin at the bottom. There are thin borders all around, so it’s not quite as bezel-less as the Apple handset.

The back of the LG phone features a pair of cameras arranged vertically at the center. There’s a fingerprint scanner below them and an LED flash unit and Laser Autofocus unit besides them.

Heading to the bottom, the G7 ThinQ has kept its 3.5mm headphone jack intact. There’s also a USB Type-C port, a speaker grille, and antenna bands. SIM cards can be inserted in the slot up top. The left of the smartphone gets a power key and volume rockers.

The right is especially interesting, as it appears to have a dedicated button for the Google Assistant. Samsung has something similar in place for Bixby, so it looks like LG is copying its biggest rival in more ways than one. The Bixby key isn’t especially popular among Galaxy S8/S9 users, so here’s hoping LG allows users to reassign that button to something else.