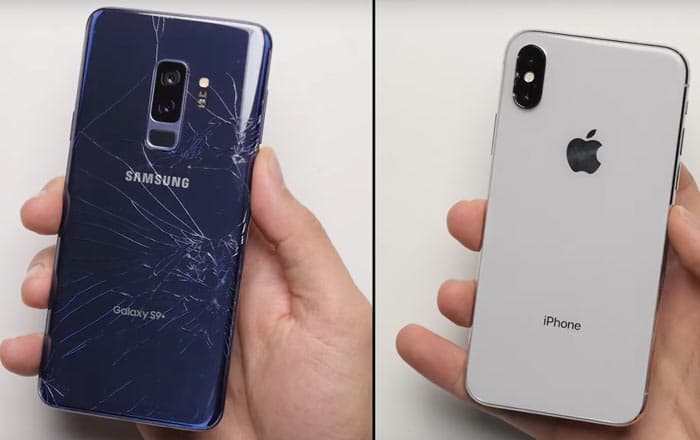 Samsung’s Galaxy S9 and Galaxy S9+ were subjected to two drop tests recently, triumphing over its sworn enemy, the iPhone X, in both. All 3 feature glass on the front and back, with the South Korean firm claiming that it’s used 20% thicker glass and a stronger aluminum frame and Apple boasting that it’s used the most durable glass ever on a smartphone.

Apple’s statement has already been tested by SquareTrade. The company had previously declared that the iPhone X was the most breakable iPhone ever with a breakability score of 90. In contrast, the Galaxy S9 and Galaxy S9+ have performed much better in its evaluations, with scores of 71 and 76, respectively.

That puts the pair at medium (S9) and medium-high (S9+) risk, beating out previous Galaxy phones as well. SquareTrade warns that the duo is still very vulnerable to breaking apart though, as both shattered in every 6-foot drop test and cracked in the 60-second tumble test.

Backing up SquareTrade’s findings is a video by YouTuber PhoneBuff who compared the Galaxy S9+ to the iPhone X side-by-side. Apple’s flagship held up very well in the first back drop test since it mostly remained intact while the Galaxy S9+’ rear splintered.

This trend continued with the side test as the iPhone X’s stainless steel frame won out over the Galaxy S9+’ aluminum one. This streak came to an end with the third facedown test when the tables got turned and the Samsung smartphone emerged nearly unscathed and the Apple device got smashed to smithereens.

All-in-all, PhoneBuff gave the Galaxy S9+ a score of 35 and the iPhone X a score of 34. Samsung won in the end because it performed better overall. As we noted above though, both phones are at risk of shattering so it might be best to buy a case no matter which handset you have.