The Xiaomi Mi 8 launch is reportedly happening at an event in China on May 31. The Mi 7 phone and Mi Band 3 fitness tracker may also be unveiled at the event. 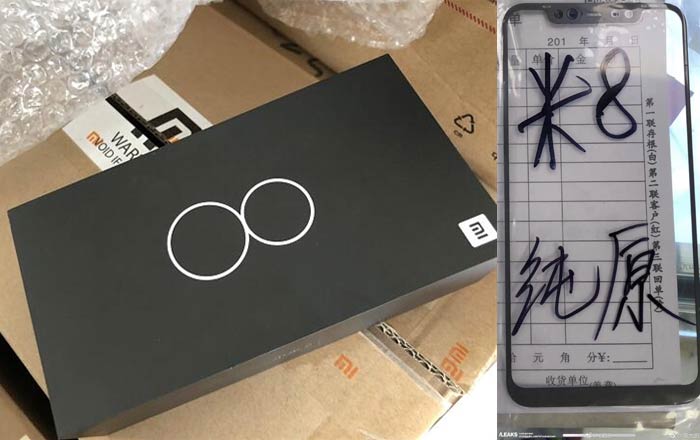 It seems Xiaomi is selling tickets for its 2018 Annual Product Launch. Over 5000 people can be accommodated at the location, so it’s probably looking to reveal something big. Many claim that there’s going to be a special eighth anniversary Mi 8 to mark the brand’s eighth birthday.

Proof of this is now emerging on Weibo. One particular photo features the box the Mi 8 is apparently going to be sold in. The number 8 is clearly seen at the top. There’s a suspected Xiaomi poster with the number 8 floating around as well. Another leak shows a listing for a new product in the company’s official Mi Store app with the same 8 symbol seen in the poster.

Plus, the so-called Mi 8’s front panel has leaked out with 8 scribbled on top. The notch at the top features several holes, possibly for sensors and cameras. Rumor has it that the brand is developing its own version of Apple’s advanced Face ID system. Some have even said that the device will be blessed with an under-screen fingerprint scanner.

The one thing no one has been able to figure out is whether Xiaomi is going to launch both the Mi 7 and Mi 8 or skip the Mi 7 entirely. If it goes the Apple way, the former scenario will probably play out since the US brand released an iPhone 8 and a special 10-year anniversary iPhone X last year.

We’ll let you know when the Xiaomi Mi 8 launch gets confirmed once and for all. Since it’s the firm’s flagship phone, the handset will likely get a premium price tag.