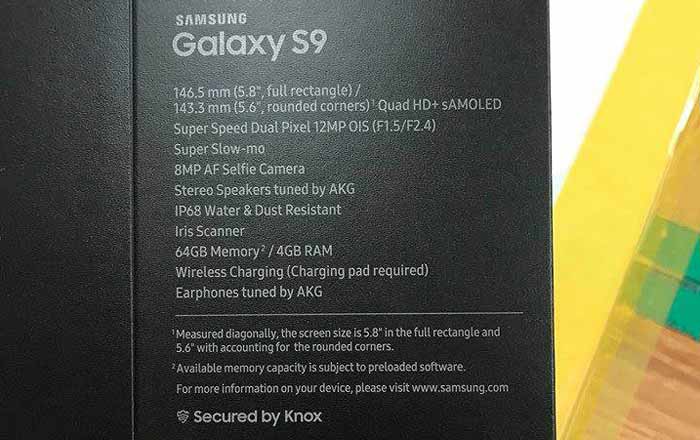 Samsung’s hotly anticipated Galaxy S9 has so far been expected to look and behave just like its predecessor, albeit with some notable changes along the way. However, this may not strictly be true after all since the phone’s retail box has gotten leaked and revealed some pretty intriguing information.

For instance, it seems the Galaxy S9 will ship with a Super Speed Dual Pixel 12MP OIS camera. It’s not clear what that means yet, but it probably has something to do with autofocusing. It also boasts of a variable aperture of f/1.5 and f/2.4, a unique feature not commonly seen in smartphones nowadays.

Having a variable aperture means the Galaxy S9 will be able to switch between the two as needed. The f/1.5 aperture can be used to let in more light in dark environments, while the f/2.4 aperture would be best suited for well-lit scenarios. Samsung has a similar setup going on with its W2018 flip phone, so it’s no stranger to using multiple apertures.

A Super Slow-mo feature is also mentioned. There were a couple of rumors last year that the Galaxy S8 would be able to shoot 1000fps slow-motion videos, so perhaps the company has perfected the technology for its sequel.

Another interesting new addition is the appearance of stereo speakers tuned by AKG. Renders of the Samsung offering have indicated that there’s no space for 2 grilles up front, so the earpiece will probably serve as one end and the bottom firing speaker as the other.