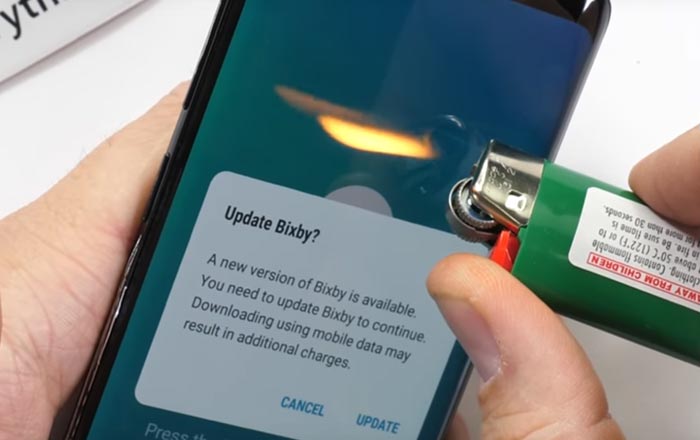 Samsung made some big claims about the Galaxy S9’s durability when it announced the phone, asserting that it had used a stronger aluminum material to make it more scratch and impact resistant. YouTuber JerryRigEverything put this to the test in a new video, making the handset go through scratch, burn, and bend tests along the way.

He starts with his standard scratch tests, finding that the Galaxy S9’s AMOLED Gorilla Glass 5 screen could withstand scratches up until Moh 6 levels of hardness. This is comparable with other flagships, although it doesn’t quite cross the HTC’s sapphire glass display which can go up to level 8 without a mark.

Level 6 means that common items like coins, razor blades, and keys won’t leave a scratch on the Galaxy S9, so you can safely store it in your pocket. Jerry appreciated the earpiece’s metal design, noting that it’s better than the cloth ones found on other handsets. He also verified that the 8MP front and 12MP rear camera are safe from marks thanks to a layer of glass.

The newly-relocated fingerprint scanner at the back didn’t perform as well, as it got scratched up very easily. Still, the reader continued to function so you won’t have to worry about a performance drop. Moving on to the burn test, it took 12 seconds for the Galaxy S9’s pixels to start going white.

The AMOLED panel recovered very quickly from the flames, but the oleophobic coating didn’t. Finally, the Galaxy S9 managed to pass the bend test with flying colors, tolerating flexes from both the front and back thanks to the enhanced aluminum frame.