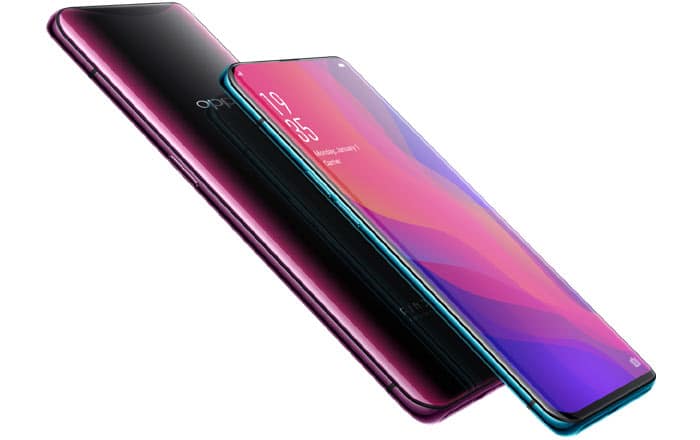 The Oppo Find X has made its way to India about 3 weeks after its global launch in Paris. The flagship phone boasts of a sliding camera mechanism which pushes the rear and front cameras up and down.

It sounds similar to the Vivo Nex S, except the rival handset only pops up its front shooter. Oppo goes to the next level with the Find X, preventing any kind of interruption on the back and front. It helps promote the device’s free-flowing rippling water-like design philosophy, but it might give some users pause.

Oppo claims the slider moves in about 0.5 seconds, so people won’t have to wait around for too long to get clicking. However, there’s no fingerprint scanner on the smartphone, forcing folks to exclusively use the 3D Face Recognition system positioned on the slider.

The Find X is apparently the first Android phone to utilize 3D Structured Light Technology. If that sounds familiar, it’s because Apple used it in the iPhone X. The new handset projects 15000 dots onto a user’s face to check whether it’s really them. The company goes as far as to claim that it’s 20 times safer than fingerprint scanning.

Also Read: Oppo F7 gets launched with a notch and a 25MP selfie camera

Still, the idea of waiting around for a slider to whirr up to unlock a smartphone may not appeal to everyone, as fast as Oppo might claim it is. Plus, there’s always a danger with moving parts since they can get stuck. The device notably isn’t waterproof, so owners will have to be careful around liquids.

The Find X is priced at a premium Rs 59990, pushing it to compete with the likes of the Samsung Galaxy S9. It’ll go up for pre-orders on Flipkart starting from July 25. Early birds will get a Rs 3000 Flipkart voucher. Sales will begin on August 3, eventually hitting offline outlets over time.