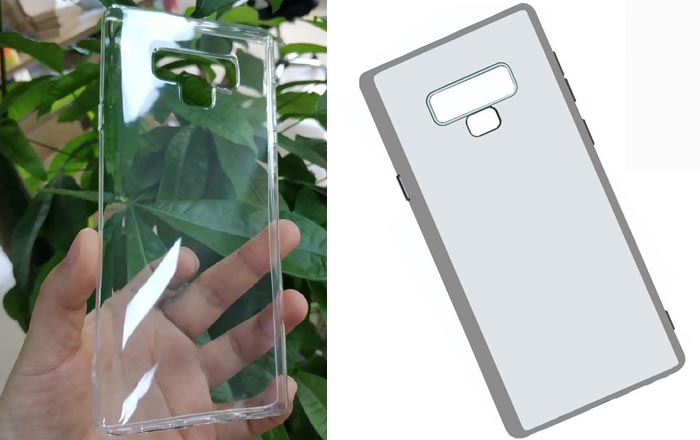 A portrait of the Galaxy Note 9 has begun taking shape over the past few weeks thanks to numerous leaks. It seems Samsung is going to stick to the same design, but with a few tweaks here and there.

One of those tweaks could arrive in the form of a repositioned fingerprint scanner. To recall, the Galaxy Note 8 has its reader next to the dual camera module. Some folks aren’t too pleased with this since the chance of camera smudges are very high.

Frequent tipster Ice Universe has now taken to Twitter to leak photos which show that Samsung is going in a different direction for the Galaxy Note 9. One is a live image of a case for the device. It has a very wide cutout for the horizontal twin lenses. It’s joined by a smaller rectangular cutout below it which is presumably for the fingerprint scanner.

The second image is a drawing of the alleged Galaxy Note 9. It features the same fingerprint sensor position. As some have pointed out, it’s a bit too close for comfort to the dual shooters. The risk of smudges is still very high since users will have to be careful not to overextend their fingers.

That’s not the only big change in store for fans. Samsung appears to have added an all-new button at the bottom-left side of the phone. It may just turn out to be a dedicated shutter key, but no one knows for sure. The other buttons are presumably the volume keys, Bixby button, and power button.

The Galaxy Note 9 is probably going to sport a 6.4-inch Super AMOLED Infinity Display, a Qualcomm Snapdragon 845/Exynos 9810 processor, Android 8.1 Oreo, and a 4000mAh battery. Chances are, the handset will get launched in August or perhaps even July.