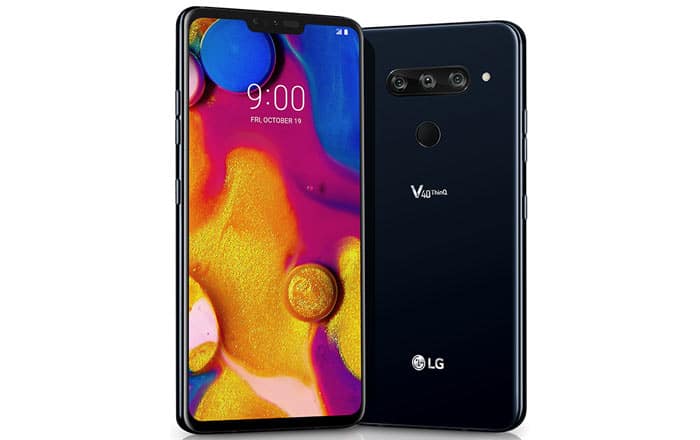 The LG V40 ThinQ has finally become official in the US after a big launch event the company recently held in New York. The phone actually made its debut last week in South Korea, revealing most of its specs in the process.

LG is asking for a pricey $899.99 (approx Rs 66400) for the V40 ThinQ, putting it in competition with similar expensive flagships like the Samsung Galaxy Note 9 and iPhone XS Max. It’s trying to make the figure a bit more palatable by promising a free DJI Osmo Mobile 2 gimbal and 256GB SanDisk microSD card for free.

Folks will probably need that card since the V40 ThinQ only has 64GB of space inside and no other memory variant. The device is extremely photography-focused thanks to its rear triple-camera setup and front dual-camera setup, making for a total of 5 cameras overall.

The back-facing module consists of a standard 12MP lens + telephoto 12MP lens + super-wide-angle 16MP lens. The LG phone’s main 12MP sensor boasts of 1.4um pixels, much larger than the 1um pixels of the V35. This should improve low-light performance to a large extent, in combination with an f/1.5 aperture, OIS, and Dual Pixel autofocus.

The other 12MP shooter in the V40 comes equipped with 2x optical zoom and support for iPhone-esque natural, studio, contour, stage, and stage mono portrait lighting effects. The last 16MP snapper has a 107-degree field of view to squeeze more people into a photo.

Interestingly, LG allows users to shoot images through all 3 cameras simultaneously, giving them more freedom to select the best shot. They can also preview what the image will look like through each lens before pulling the trigger.

Specifications of the LG V40 ThinQ:

You can buy the LG V30 ThinQ starting from October 18 in Aurora Black and Moroccan Blue.