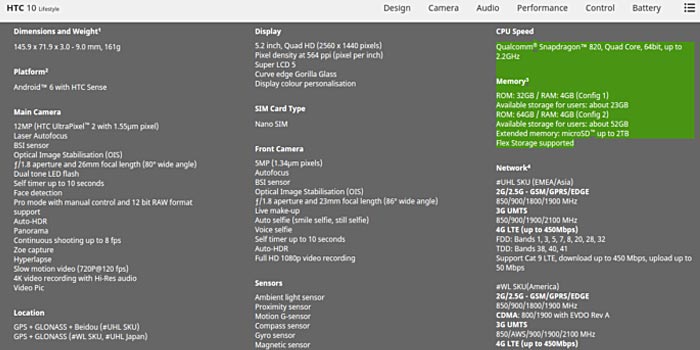 The HTC 10 was launched internationally with great fanfare yesterday, but there’s been nothing but confusion when it comes to the handset’s India release. The company is yet to clarify which version of the phone will be arriving in India.

HTC’s India website is currently listing the Lifestyle model of the flagship device. This should have been enough to confirm that this version is making its way to country. However, a spokesperson for the brand has stated that this is not set in stone and an official announcement regarding the phone will be made soon.

In a head-scratchingly odd move, the company has decided to change the specs of the HTC 10 Lifestyle on its India page. The list now includes the same specs as the standard variant, complete with Snapdragon 820, 32GB or 64GB of ROM and 4GB of RAM.

This brings up two possibilities. Either the HTC 10 is set to be launched as the HTC 10 Lifestyle in India or the manufacturer made spec edits but forgot to change the name of the handset itself. It’s a baffling scenario, made more complicated by questions on what this means for other markets outside of the subcontinent.

A quick summary of the specs of the HTC 10:

We’ll let you know the moment HTC decides to clear the air of confusion surrounding the HTC 10 right now. The phone is currently up for sale in the US priced at $699.99 and can be bought here.