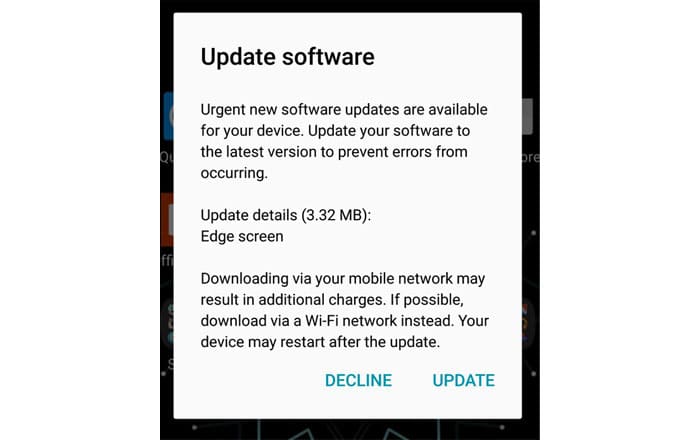 Samsung has probably found a flaw in its upcoming Galaxy S7 Edge that’s apparently so grave that it has prompted the company to release an ‘urgent’ update for the smartphone, even before it is released officially. The South Korean giant has held back on revealing the exact reason for this update.

It has however, said that this has something to do with the Edge screen which is used to display extra information. That’s the reason why the Samsung Galaxy S7 device has not been issued this ‘urgent’ update. As pointed out by Phandroid, the size of this package happens to be just 3.32MB.

Samsung unveiled its two new flagship handsets at the MWC last month, and they are slated to go on sale later today in the US, Europe, Singapore, Australia and Korea. These phones will be hitting India on March 18, with their prices tagged at Rs 48900 (S7) and Rs 56900 (S7 Edge).

Here’s a neat look at the main specs of the Samsung Galaxy S7 Edge:

With these models, the company has basically gone on to address the very few complaints owners of the previous S6 models had. They hence come with IP68-certifications for dust and water resistance, and even grab microSD card slots. The batteries still can’t be removed, but they are larger than those on the S6 models.

Like we said, the ‘urgent’ update to the Samsung Galaxy S7 Edge which fixes some flaw in the curved part of its display is out now for download via OTA.