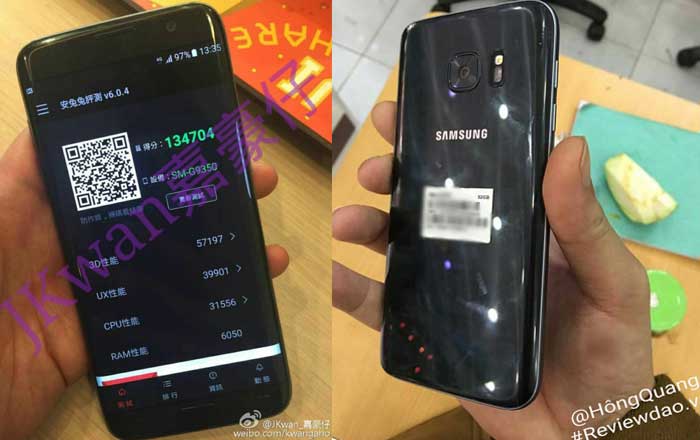 Samsung may have made the Galaxy S7 official, but that hasn’t stopped a glut of leaks from pouring in since then. A fresh set of live images of the handset have emerged recently confirming many alleged specs of the device.

There’s no way to tell if these hands-on photos are the real deal, but it does match up to previous speculations about the Samsung Galaxy S7. The one on the left comes out of China and appears to show the AnTuTu benchmark score of the Edge variant. The model number seen here is SM-G9350 which had been associated with the phone earlier during the Chinese Compulsory Certification process.

The handset in the image on the right sports curved edges and a color-matching camera unit. Samsung seems to have gotten ridden of the latter’s hump as rumored, but it’s not possible to determine whether it’s a 12MP snapper. We’ll have to rely on the source of the photo for that, who says it does indeed possess a 12MP shooter with enhanced low-light shooting abilities.

As per SamMobile, the Galaxy S7 will be sold in two versions, with one sporting an Exynos 8890 processer and the other a Snapdragon 820 SoC. The first is apparently 15% faster than the second. It’s also been fitted with fast charging technology to allow it to power up from 0 to 80% within 30 minutes. Water resistance is also going to make an appearance, as is a magnesium metal frame instead of an aluminum one.

The source claims the Samsung Galaxy S7 is priced at 16.49 million dong (roughly $740), while its Edge version can be bought in exchange of 19.9 million dong (about $890). The phone is set to launch on February 21 at MWC with its US availability expected to begin from March 11.