We’re only a few days away from the launch of the OnePlus 2 smartphone, and those excited about it will be pleased to know that some insight on its price has been provided by its makers. They have released a quote from none other than the company’s CEO, which has him assuring fans that the device will cost less than $450.

If that’s the case, then we’re guessing that the starting cost of the device will be $449. That’s still quite a large asking amount, considering that the OnePlus One was introduced at $299 and is being sold now at $249. This low retail value and its advanced features have been the two main reasons for its popularity.

But it seems the Chinese firm just isn’t able to keep the costs down this time around. Part of the blame for this goes to the fact that the OnePlus 2 has been equipped with the relatively more expensive Snapdragon 810 chipset instead of the affordable Snapdragon 801 SoC that forms part of its predecessor’s offerings. 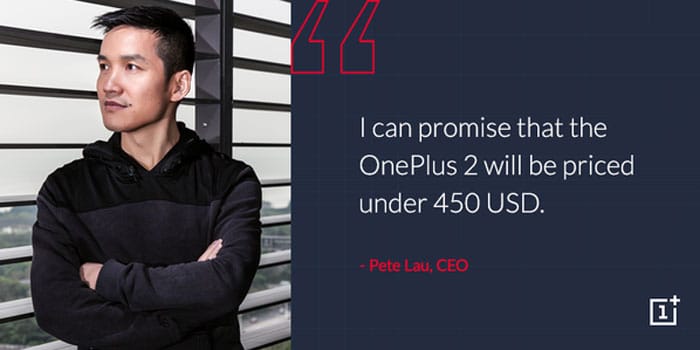 This new smartphone is also set to become one of the first in the world to grab a USB Type-C port instead of a micro USB one. Moreover, it will even carry a fingerprint scanner onboard. Other details about this device still remain a mystery, but you can expect to know more about it in the days leading up to its launch, as the company is revealing information in a bit-by-bit manner every now and then.

Also Read: OnePlus 2 will be first phone in the world to sport a USB Type-C port

July 27 will be the date on which the OnePlus 2 will be launched officially. Let us now wait for its exact price and availability details to be revealed.