Looks like the launch of the Xiaomi Mi 5 is inching closer, even as a teaser image of the alleged device has just been leaked in China. This picture doesn’t reveal much about the phone, but the presence on a fingerprint stamp on it does go on to suggest that a fingerprint scanner will be one of its main highlights.

It’s not surprising though that the Xiaomi Mi 5 carries this functionality though, as most of the high-end devices these days are adopting the technology to provide an added layer of security to users. Rival Samsung is pushing fingerprint sensors into all its high-end gadgets, and so is Apple.

But the main competition which Xiaomi is expected to face will come from the OnePlus 2 which boasts of not only a fingerprint scanner, but also a USB Type-C port. It remains to be seen if the latter standard is also adopted by the Chinese company’s next flagship or not. 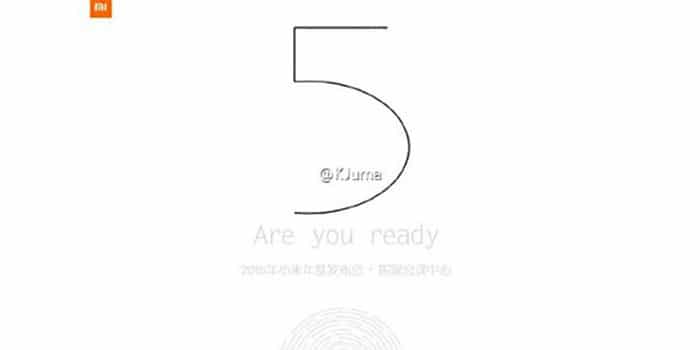 This Xiaomi handset is said to have been equipped with a 5.2-inch Quad HD display. Its makers were supposedly waiting for the Snapdragon 820 chipset to be launched by Qualcomm in order to include it in the device, but they have chosen to go with the Snapdragon 810 now, since the next-gen SoC has been scheduled for a 2016 arrival.

The Mi 5 is also believed to feature a 3000mAh battery to power all its offerings. According to Techzoom.it (via GSM Arena) which has leaked the above posted image, a 16MP rear camera and Gorilla Glass 4 will be two of its other headlining features.

There is no speculation currently about a possible launch date for the Xiaomi Mi 5, but we’re hoping that it will be revealed soon; so stay tuned.