Android 6.0 Marshmallow is slowly starting to creep into top-end smartphones from around the world, and the Samsung Galaxy S6 wouldn’t want to stay behind. Although the software is still to be officially rolled out by the South Korean giant, it has somehow managed to reach at least one device in China.

That’s where the screenshots you can see in the space down below are coming from. Of course, a redesigned version of the TouchWiz UI is easily visible in these Samsung Galaxy S6 screenshots, whereas several small additions can also be spotted.

As pointed out by Sam Mobile, the user interface bears more white space than ever, especially in the areas that shows the quick settings and notifications. But the main thing that has grabbed our attention resides in the Camera app of the Galaxy S6. As the screenshot tells us, the phone will grab support for shutter speed control via its Pro mode. 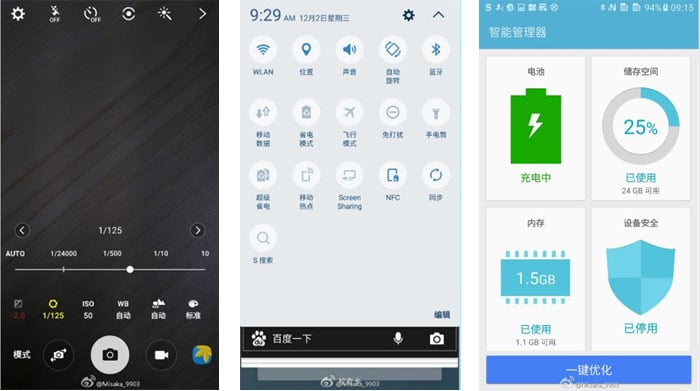 The screenshots also confirm that granular app permissions will be finding their way into this build. A leaked roadmap of the company’s Marshmallow rollout plan had told us that the S6 Edge+ and the Note 5 handsets will be the first ones to receive the software this December.

The Galaxy S6 and S6 Edge will have the software delivered to them this January, while other high-end offerings from the company will receive it later on. All this is still to be officially confirmed by the firm though; so it must be taken with a pinch of salt.

Let us now wait and watch when Samsung actually reveals the exact schedule of the Android 6.0 Marshmallow rollout for its existing Galaxy handsets.