A teaser image which has just popped up in China is suggesting that the Huawei Mate 8 smartphone will be revealed on November 26. This new phablet is expected to ship with the company’s new Kirin 950 chipset that itself is scheduled for a November 5 unveiling.

The Huawei Mate 8 has been in the pipeline since quite a long time. We had earlier heard that the device is scheduled to be released towards the end of this year, so the suggested arrival time matches with the previous speculation.

The teaser image in the space down below has come through a Chinese website (via GSM Arena). As you can see, the digit 8 clearly suggests that it’s the Mate 8 phablet that is being talked about. 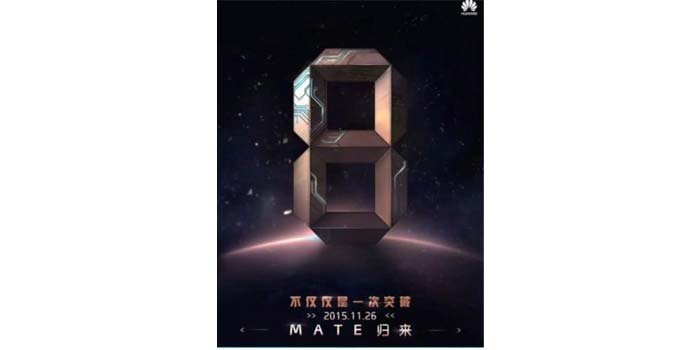 Not much its known about the Huawei offering, but like we said, the ultra-powerful Kirin 950 chipset will indeed be present inside it. It will apparently sport a 6-inch 1440p display, and ship with either 3GB or 4GB worth of RAM insider it, depending on whether the model features 32GB or 64GB of storage space.

The camera setup of this phone supposedly includes a 13MP rear unit and an 8MP front one. It is also being said that the Mate 8 will ship with a SIM tray that will support two SIM cards and a microSD card. Other crucial details regarding the handset, including its battery capacity are still to be heard of.