The new LG V10 comes equipped with a pair each of front cameras and displays. This newly unveiled phone from the South Korean giant actually brings with it a dual front camera setup as well as an inset display called the Second Screen. Another great feature about this device is that it offers manual camera controls for video mode as well.

As leaks had already told us, the tiny Second Screen works in an ‘always on’ mode when the main display is off. It moreover, also acts as a launching area for certain apps when the main screen is on. And when you’re in specific apps, the LG V10’s Second Screen throws important controls at your disposal.

Before we come to its camera setup, we’d like to tell you that this LG smartphone comes with a fingerprint scanner that has been embedded into its power button. It features a stainless steel frame on its sides, while its rear surface is made from a silicon-like material called Dura Skin. 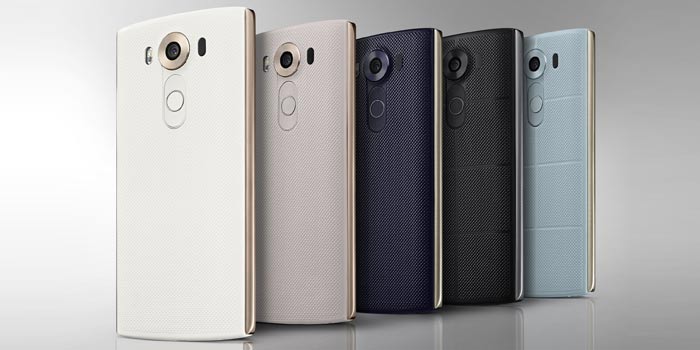 The V10 kicks in two 5MP shooters on its front surface, offering wide 120-degree selfies without the kind of distortion that usual wide-angle selfie cameras offer. There’s even a trait that allows you to click videos simultaneously through all the three cameras that are present on the phone.

A quick look at the specs of the new LG V10:

That brings us to its rear snapper. It’s a 16MP unit with an f/1.8 aperture and optical image stabilization support. The manual mode which is still a rarity of smartphones, is offered not only for photographs but also for videos by this device. Using it, owners will be able to adjust shutter speed, frame rate, ISO, white balance and focus while recording.

The LG V10 will be released in Korea later this month, while it will be making its way into the US, China and select countries within Asia, Latin America and the Middle East later on. There’s no word on what price it will be seen selling at.