LG has been long rumored to be working on its own mobile chipset dubbed Odin and it looks like the first device to carry the in-house silicon isn’t far from launch as the F490L smartphone recently got certified by Bluetooth.org. The website doesn’t say much about the device, but it has revealed that it’ll have Bluetooth 4.0 and 4G LTE connectivity.

According to leakster UpLeaks, the LG F490L is most likely to go official under the Liger moniker. The branding clearly doesn’t fit the Korean giant’s current naming policy and it could very well just be a codename for the device. And while there’s absolutely no concrete information to share on the smartphone, we do know quite a bit about the Odin processor. 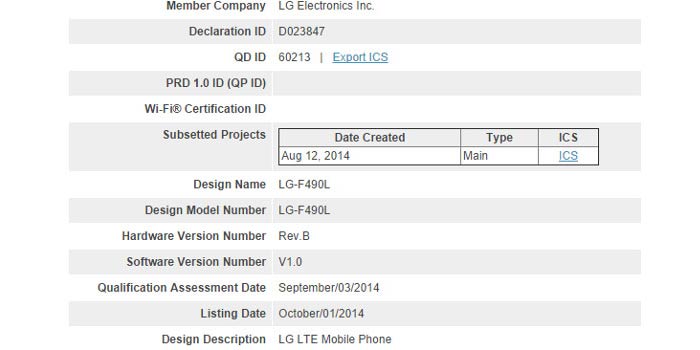 An initial benchmark of the chipset surfaced back in 2013 where it looked to be a pretty beefy piece of silicon. According to the data provided, LG will design the SOC with an octa core configuration based on the big.Little architecture featuring two clusters of four cores each. One set will be of Cortex A15s with the other comprising of Cotex A7s.

For graphics, the company could go with the top-tier Mali 760 GPU which is said to be even faster than Nvidia’s Tegra K1 GPU, or a PowerVR Series 6 module. GSMArena notes that there’s a possibility of a second chip being in the works with only four low-power Cortex A7 cores and Mali 604 graphics. It isn’t confirmed which SOC will be present in the Liger.

Seeing as the LG F490L a.k.a Liger has received Bluetooth certification, we might soon see it get approved by the FCC or China’s TENNA, and finally go official.