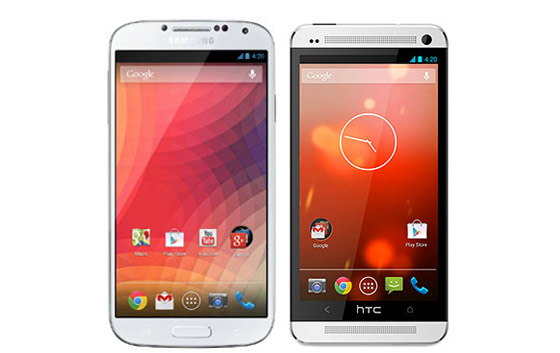 Out to be purchased on the Play store in the US are the Samsung Galaxy S4 and HTC One Google Edition phones. The common release date of these Samsung and HTC flagships bearing the stock Android OS, should fall on or before July 9, while their price points stand at $649 and $599, respectively.

Unveiled in May this year, the Samsung Galaxy S4 and HTC One Google Edition devices herald a different approach by the tech giant for releasing its stock OS. That’s because this job was earlier entrusted only to Nexus-branded gadgets. These unlocked phones basically adopt the original Android operating system, and have no UI overlay on top of them.

So, the stock 4.2 version of the Jelly Bean OS, is what the Samsung Galaxy S4 and HTC One Google Edition smartphones run. Internal hardware however remains the same as their respective basic models. Each of the devices comes powered by Qualcomm Snapdragon 600 quad core processors, while both even grab 2GB worth of RAM.

The big difference between the Samsung Galaxy S4 and HTC One Google Edition phones lies in the display department. While the former throws its visuals out on a 5-inch Super AMOLED screen, the latter relies on a 4.7-inch Super LCD3 estate for this job. 1080p Full HD resolution is available through both.

On the other hand, the Taiwanese manufacturer’s flagship model bears dimensions of 137.4mm x 68.2mm x 9.3mm and its weight reads 143 grams. One of its high-points is its Ultrapixel camera which excels in low-light image capturing.

The Galaxy S4 and One Google Edition phones are meant only for the US, and have been unlocked for LTE networks there. They can be snapped up by interested parties in the said country through the Play store at the price points we’ve mentioned above.