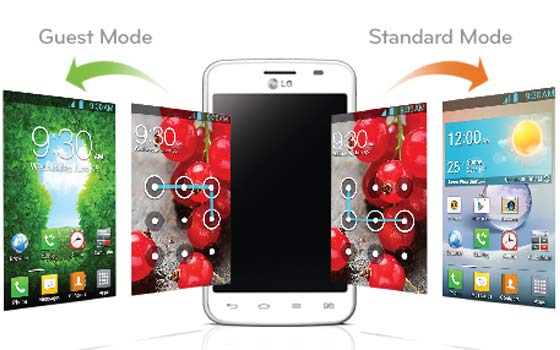 The LG Optimus L4 II Dual has skipped an official announcement in India and has decided to go up on the company’s website anyway, flaunting a sub-Rs 10,000 retail tag. While the L3 II, L5 II and L7 II have already gone live in the country, this addition isn’t the last entrant for the series as LG is yet to unveil the L9 II which has leaked out a couple of times already.

The LG Optimus L4 II Dual misses out on a couple of features as compared to its single SIM version, the most prominent one being the illuminated LED home button for notifying users with alerts on missed calls, messages and more through changeable colors. Instead, this piece of hardware features 4 capacitive touch buttons, one of which is the quick switch hot key to change the default SIM card in use.

The LG Optimus L4 II Dual comes with the same design language as its siblings. It flaunts rounded contours which are laser cut and a gleaming rear panel with a textured finish. Where dimensions are concerned, the phone measures 112.8mm x 64.7mm x 11.9mm and it weighs just about 125 grams. Being a budget-friendly addition to the company’s lineup, customers can expect to find entry-level specifications like a 3.8-inch HVGA (320 x 480p) True IPS touchscreen. 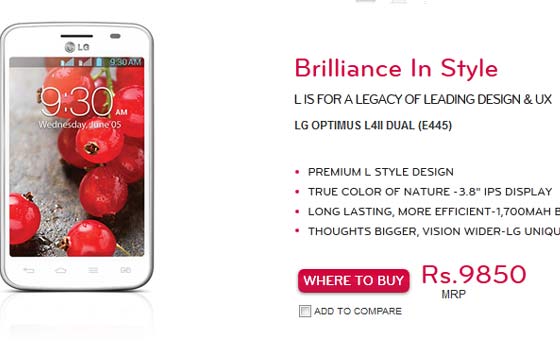 Flip over to the rear and the LG Optimus L4 II Dual will show off a 3MP AF camera with LED flash. Tucked away on the inside is a 1GHz processor, 512MB of RAM, 4GB of storage, a 32GB complaint microSD card slot, 512MB of RAM and a 1,700mAh Li-ion battery. The phone runs on the Android 4.1 platform and it’s capable of delivering 10.5 hours of talktime or 652 hours of standby.

The Optimus L4 II Dual has showed up on the company’s online store carrying a price of Rs 9,850. So far, no national retailer has started offering the handset. But when they do, we expect the retail amount to drop down a bit. The device is currently listed in black and white shades.