Yes, that probably happened – Google may have accidentally leaked the Nexus 5 while unveiling the upcoming version of Android dubbed KitKat 4.4. Apart from this, the search giant has run out of stock of 8GB Nexus 4 units and chances of it replenishing inventory is highly unlikely. So this would mean that the company only has a 16GB version to sell, which suggests a new arrival is in the pipeline.

Droid-Life notes that Google might introduce a refreshed Nexus 4 under the hammerhead codename. Could this be the 32GB model with 4G LTE connectivity which was under speculation for months now? The latest revelation points to something completely different than the current Android flagship. At the unveiling of the KitKat statue, an official video managed to capture one employee taking images with an unidentified Nexus handset. The banding on the device looks similar to that of the Nexus 7, but the phone seen in the image below is too small to be the 7-inch Google tablet. Also, it’s a tad larger than the Nexus 4, which is visible on the right. 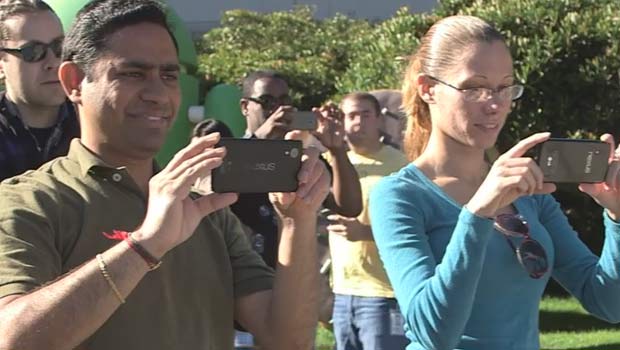 What’s been highly speculated about is the manufacturer of the smartphone. So far, HTC, LG and recently, Motorola have been the rumored to be the brains behind the handset, but if you were look at the above image closely, the LG logo is visible on the bottom, not clearly through. This could be one of the prototypes we’ve spoken about in the past months or do you think it’s the rear deal? If so, the Nexus 5 could be based on the G2. Wait – There’s another revelation is this leak. Notice that the camera housing on the rear is quite large. This suggests that the device could have a beefy sensor to take on the recent trend of high performance shooters in phones. Check out the unveiling video embedded below.

The jury is still out on which manufacturer will make the Nexus 5, but by the looks of things, LG is most likely to get a second shot at some Nexus fame.