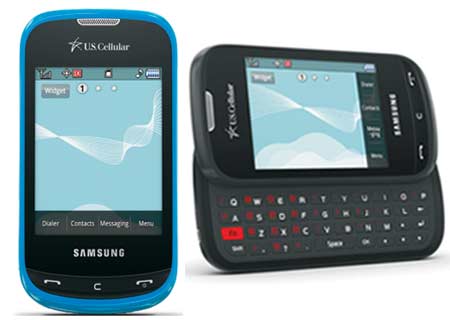 U.S. Cellular now adds the Samsung Character handset to its portfolio of feature phones possessing functionalities for fun and interaction. Weighing a little more than four ounces, the touchscreen phone with a QWERTY keypad is loaded with basic attributes for connectivity and entertainment.

Outfitted with 2.8-inch QVGA TFT multitouch screen, the Samsung Character phone splashed in hues of blue and gray operates on Samsung TouchWiz Lite. Besides the slide-out QWERTY, it employs 1.3MP camera in addition to built-in speakers. It offers an option of three home screens along with same number of main menu screens to support widgets.

With services like easy edge SM and Native Music Player which supports microSD, users can personalize their phones. It allows downloading games, wallpapers, polyphonic ringtones and more. As the phone touts to entertain on-the-go, it packs in various functionalities like text and picture messaging. Apart from widgets and music player, the device incorporates the GPS technology.

This handset can be used to browse the web as it is equipped with a built-in browser. For wireless connectivity to various devices, it integrates v2.1 Stereo Bluetooth. Also, one can give vocal instructions to the phone with the help of its voice recognition software. Further it is powered by the standard 1000mAh 3.7 Volt Lithium Ion battery providing a talk time of up to five hours.

The Samsung Character phone is up for grabs at a price of $39.99 after a $50 mail-in rebate. It is available through U.S. Cellular with a two-year agreement.