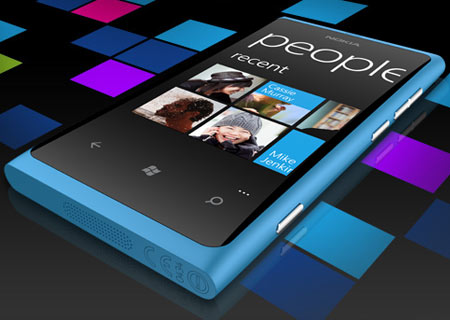 The long line of handsets at the Nokia World 2011 probably had the Nokia Lumia 800 Windows Phone 7 as its star player owing to the fact that it’s the Finnish company’s first ever device running on Microsoft’s mobile OS. And no, it’s not the Nokia N9 even if does look very like one.

Going the spare-us-the-buttons way, this Lumia is a slab of polycarbonate and glass touched off by subtle curves and a 3.7” AMOLED ClearBlack display. The Back, Start and Search buttons are set in the glass so that there are no bumps on the smooth surface. The 8MP AF camera on the back boasts of Carl Zeiss optics and it can shoot HD video at 30fps.

Driven by a 1.4GHz CPU and a graphics ‘co-processor’, the phone lands with 16GB of internal hoarding space and there’s 25GB of free extra cloud storage to expect courtesy of SkyDrive. Quad band reception and communications up to HSDPA 3G as well as Bluetooth and Wi-Fi range among the connectivity options which Nokia has bundled into the Windows Phone 7 smartphone.

Users get up to 13 hours of talk time or 335 hours of standby time and they can turn to Nokia Drive for navigation tips. In terms of entertainment, there’s Nokia Music’s MixRadio and the web surfing experience is doled out via the Internet Explorer 9 browser which can get along with HTML5 really well, or so they say.

The Nokia Lumia 800 attaches a price tag of around €420 before local taxes and subsidies. It’s going to France, Germany, Italy, the Netherlands, Spain and the UK in black, cyan and magenta this November. Hong Kong, India, Russia, Singapore and Taiwan will welcome it before 2011 is over and other markets can expect the handset in early 2012.