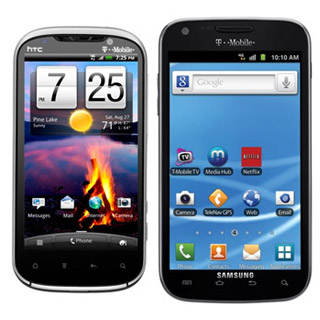 The HTC Amaze 4G and Samsung Galaxy S II with a ‘fastest smartphones’ label on the T-Mobile 4G network have sure managed to garner much attention. The T-Mobile Sonic 4G Mobile HotSpot has also been announced. Unveiled at Mobilize 2011, the handsets are slated to make the most of the HSPA+ 42 network. Faster web browsing, with an average of 8Mbps download speeds and touching the peak at 20Mbps are an added perk of these phones.

“These new products unlock the full potential of our faster 4G network and deliver the best experience yet for watching video, surfing the Web, and creating and sharing content on the go,” mentioned Cole Brodman, chief marketing officer, T-Mobile USA. “A 4G connection delivers a much improved experience, which entices consumers to do more with the devices they carry. We’ve seen that first hand; customers with 4G devices on our network consume roughly three times as much data compared as those with 3G devices. Smartphone buyers are increasingly looking for built-in 4G capability, and we’re offering what we believe is the best 4G product portfolio in the industry.”

As for the Samsung Galaxy S II, it’s equipped by the same Qualcomm Snapdragon S3 processor as the HTC Amaze, though it works on Android 2.3.5. The NFC-enabled smartphone has mobile entertainment at its core, making an array of premium movies available via Netflix, T-Mobile TV in Mobile HD, Samsung Media Hub and YouTube. The handset has been fitted by a 4.52” Super AMOLED Plus touchscreen and is compatible with DLNA and HDMI out.

Finally the T-Mobile Sonic 4G Mobile Hotspot has been tailored to allow a maximum five Wi-Fi enable devices to enjoy T-Mobile’s 4G speeds. This Huawei device bears a sleek profile and is ultra-portable, tipping the scale at a mere 3.88 ounces. What’s more, it includes an SD card slot, capable of housing an expandable memory of 32GB too. Users will be able to see the signal strength and the list of connected devices together with attributes like unread text messages, battery level, internet and network connection type.

Both the HTC Amaze 4G and Samsung Galaxy S II will be up for pre-order beginning October 10, onwards while they should hit T-Mobile retail stores and other dealers beginning October 12. Offered with a two-year contract and corresponding Classic voice and data plans, the Amaze and Galaxy S II will put users down by $259.99 and $229.99 respectively after a $50 mail-in rebate. T-Mobile hasn’t revealed the exact pricing and availability details of the Sonic 4G Mobile Hotspot, though it will be available next month.