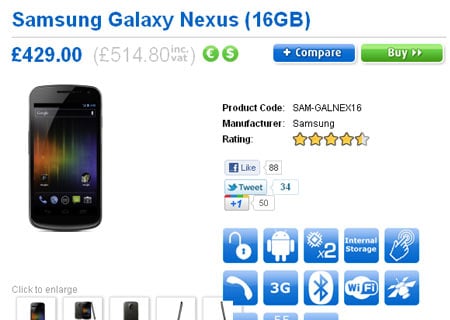 Launched alongside the Android Ice Cream Sandwich operating system, the Samsung Galaxy Nexus smartphone has made its way onto Clove for pre-order in the UK. Apart from being the first device to run on the latest Android OS, the handset packs in a 1.2GHz dual core processor and a 4.65-inch Super AMOLED display.

Equipped with a variety of new features, the device sports the Face Unlock function which allows users to access the handset through a method that involves looking straight at the 1.3P front-facing camera. Besides the new UI, many changes have been carried out on default applications such as the camera, the calendar and the web browser. Where connectivity is concerned, the smartphone comes with Android Beam to conveniently share content such as contacts, apps, websites and much more between two NFC-enabled devices.

Housing a 4.65-inch Super AMOLED multi-touch display portraying resolutions of 1280 x 720p, the handsets gets its performance boost from the Texas Instruments OMAP4460 1.2GHz dual core processor, 1GB of RAM and a 1750mAh Li-ion battery. Additionally, users can capture 1080p full HD videos through the rear-facing 5MP camera with LED flash and also quickly transfer images and movies along with other data from the built-in 16GB or 32GB flash storage over Wi-Fi b/g/n standards, Bluetooth 3.0 or via the microUSB slot.

The Samsung Galaxy Nexus price in the UK is £429 or £514.80 inclusive of VAT and it can be pre-ordered from Clove. The retailer is expected to start stocking up on November 17, 2011. However, the handset only seems to be available in the 16GB variant as of now.