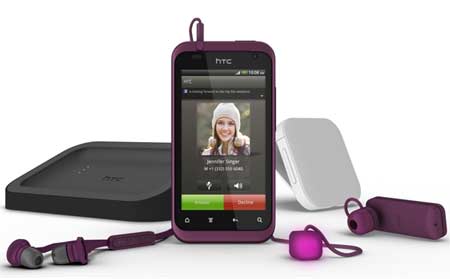 “HTC Rhyme represents an entirely new approach, based on recognition that there is a substantial group of consumers who want their phones to be more personal and complimentary to every moment of their day. HTC Rhyme is focused on delivering this through a fresh new style and experience that includes a family of innovative accessories like the HTC Rhyme Charm and Docking Station that are meant to naturally integrate into people’s lives,” stated Scott Croyle, vice president of design, HTC Corporation.

Fuelled by a 1GHz single-core processor, the HTC Rhyme smartphone operates on the Google Android Gingerbread platform. Featuring the refreshed HTC Sense, the smartphone sports an uncluttered and configurable locked homescreen. It can be customized for instant access to social networking updates, weather forecast, pictures, camera and more. Further, its connectivity options are inclusive of Bluetooth, Wi-Fi and 3G capabilities.

Additionally, HTC has launched accessories for the smartphone, some of which will be packaged along with the device. The Docking station acts as the power source for the device as well as an alarm clock and music center to play audio through its built-in Bluetooth speakers. A small light-emitting cube dubbed Charm attaches to the device through a cord. This dangling cord makes the handset easily accessible from bags and backpacks. Also included are Sports Armband, Tangle Free headphones in addition to Bluetooth headset and Bluetooth car speakers.

The HTC Rhyme smartphone will be available in October though its pricing details have not been mentioned.