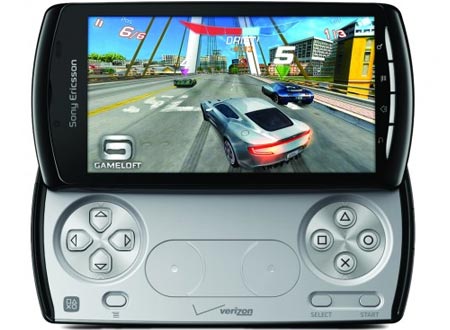 While everyone waits for other PS phones to offer some additional choice to the current collection of one, the original has been busy traveling the globe. It looks like Verizon Wireless will be able to tell their customers that the ‘Sony Ericsson Xperia Play is here’ soon enough.

The major tech specs of this handset cover a 4” multi-touch screen, Android 2.3 and a 1GHz Qualcomm Snapdragon processor with Adreno 205 GPU. It also integrates a 5MP camera, a VGA shooter on the front, Google Mobile services support and 3G mobile hotspot capability for hooking up a maximum of five compatible devices.

But the device’s highlighted feature is the fact that it’s the first PS-certified phone, something which everyone short of those living on Mars may know by now. The company offers it with seven pre-loaded games including Asphalt 6: Adrenaline, The Sims 3, Madden NFL 11 and Crash Bandicoot.

A $199.99 tag and two-year customer contract wrap themselves around the device. Fans will also need to sign up for the carrier’s Nationwide Talk plans and a smartphone data package before hoping to lay hands on the phone. These commence at $39.99 and $29.99, respectively, for monthly access.

Starting from tomorrow, the Verizon Wireless website will begin accepting pre-orders for the Sony Ericsson Xperia Play, while it’ll arrive in stores on May 26. V CAST Apps will have over 50 other games ready for downloading when it launches.