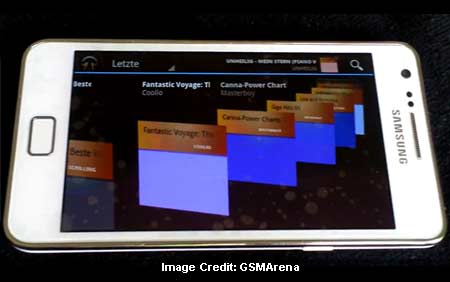 Well, there are bound to be speculations surrounding an event which is rumored to host the launch of a new Android platform and the latest one is about the Samsung Galaxy S II running Ice Cream Sandwich. It’s a pity we’re not talking about the real thing any more though.

The news came our way through GSMArena who got hold of a video which features the white-colored Samsung Galaxy S II. This smartphone was shown to be running on the Google Ice Cream Sandwich platform, which is yet to be released. The fact that this Gingerbread device which has managed to garner a lot of attention from tech enthusiasts was spotted running Android 4.0 undoubtedly had a lot of tongues wagging.

Unfortunately, it turns out that the whole video demo was a cruel joke after all. An update to the post reveals the entire episode to have been conjured up courtesy of third party software add-ons. This only makes it look like the handset in question is running Google’s frozen treat of a mobile operating system. In order words, the video happens to be misleading.

The key highlight of the October 19 event for the Ice Cream Sandwich unveiling is expected to be the launch of the Samsung Galaxy Nexus which will employ the latest Android platform. Reportedly, the Galaxy Nexus will be equipped with a 1.2GHz dual-core Cortex A9 processor and 1GB RAM. The sleek phone is supposedly fitted with a 4.65-inch Super AMOLED multi-touch screen. There is no confirmation on whether the smartphone will boast of an 8MP camera or a more modest 5MP snapper.