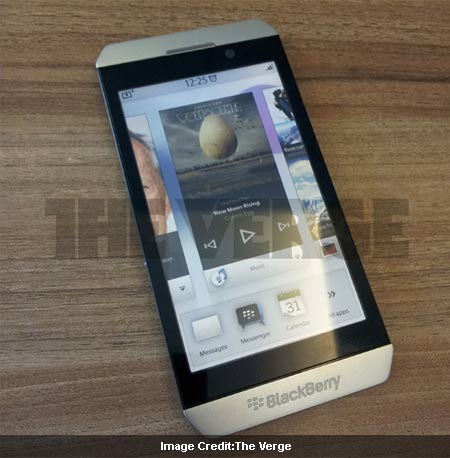 Techville is abuzz with rumors regarding a recently leaked images of the BlackBerry London which is being foreseen as the first device from RIM to sport the BBX OS. Said to be planned for a June 2012 release, this smartphone is apparently thinner than the iPhone 4 and more or less the same size as the Galaxy S II.

The Verge had come up with an image yesterday spewing out heaps of speculations regarding the device. It has been validated that the handset in question is called the BlackBerry London and will be outed mid next year. After RIM’s acquisition of QNX last year, it had come to light that the BBX OS is supposed to be a blend of the attributes put forward by BlackBerry as well as QNX.

Coming towards the London, as can be seen in the image, this handset kicks in a rather large display, with no keys on its front. It is believed to be equipped with a TI OMAP dual-core 1.5GHz chipset, 1GB of RAM, 16GB of internal storage, an 8MP rear camera and a 2MP front-facing camera. Moreover, this smartphone is supposedly capable of standing upright on its sides.

The picture also goes on to indicate that the London is running an alternative version of the PlayBook‘s OS. Close observation however reveals that the coloring and icons have certainly received a few modifications. With the BBX SDK’s having already reached developers, BlackBerry fans can start expecting some big surprises next year.

Now news that the BlackBerry London is apparently the first RIM handset with BBX OS may not have been officially confirmed by the company, but let’s see if the image leak is compelling enough for the Canadian manufacturer to shower us with some certified details.