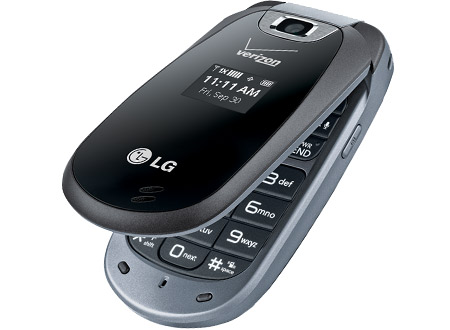 Those who pick up the LG Revere from Verizon Wireless may not necessarily boast of having simplicity as their style quotient. That’s because this no-frills phone can be admired more fully with the reasonably modest price tag tacked to its clamshell exterior.

Flaunting no pretensions, the handset aspires to be nothing more than a basic flip out toy with a funny name. And we’ve got to respect it for that without thinking hard about its venerable build. Pictures can be clicked through the integrated 1.3MP camera with 2x zoom. It’s supplemented by options like the ability to upload photos to Facebook or online albums, image editor, night mode and a couple of other tweaks.

This VZ Navigator-capable device lets users avail of audible turn-by-turn directions and the main menu boasts of being customizable. There’s also a Mobile Email app which can be used a limited number of times before charges are applicable. The subscription fee for the application reads at $5 per month after the tenth use.

Featuring multi-language support, the phone settings and text input may be switched between English, Spanish, Korean and simplified Chinese. Amongst the regular utilities extended by any other such device are listed Bluetooth v2.1 + EDR, accommodation of voice commands, a social networking feature and a whole suite of messaging options.

The LG Revere can presently be picked up for free through the carrier’s website with a two-year customer contract, as part of an online promotion. Starting from August 18, the phone will be out via Verizon Wireless Communications Stores at $49.99 with a two-year agreement, after a $50 rebate.