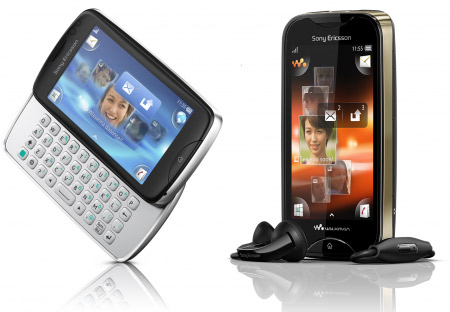 Sony Ericsson Mix Walkman and txt pro phones have been officially revealed through Facebook and are garnering their fair share of ‘likes’. While the former is a handset for music enthusiasts, the latter should hit the sweet spot for those who love messaging and hitting social networks. The phones were made public after a worldwide competition by the company in search of the ‘ultimate video reviewer’.

Specifically, the Mix Walkman has been tailored for music buffs and comes complete with Zappin key that simplifies the task of searching for a favorite song. Hitting the key will offer a preview of the following track while a separate karaoke function has also been included for some fun. The handset is open to customization courtesy of the various exchangeable color bands that accompany it.

Quentin Cordier, Global Product Marketing Manager, Sony Ericsson mentioned, “We wanted to take advantage of our extensive Facebook fan base when announcing these phones, bringing the fans closer to both our products and brand. We are really pleased that consumers liked them for their music and social media functionality and expect them to become great additions to our overall portfolio of entertaining phones.”

Fashioned for messaging and social networks, the Sony Ericsson txt pro includes a full slide-out QWERTY keyboard. It’s included with a friends application that should make hopping onto those social networks a breeze. Precisely, the application allows users to add up to five friends whose Facebook and Twitter feeds can be seen at a glance.

On common grounds, both phones feature a 3” full touchscreen with a corner user interface that’s identical to what’s seen in the Xperia mini lineup. They’re also incorporated with a 3.2MP camera, Wi-Fi and Bluetooth support and a maximum of 32GB support on a microSD card. The Mix Walkman will be dressed in black with pink cloud, pink, green bird and green band options. The txt pro will be available in black, white and pink colors.

Both the Sony Ericsson Mix Walkman and txt pro phones should hit markets globally by Q3. The company hasn’t revealed their pricing details yet.