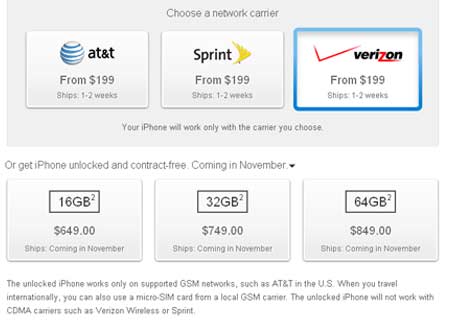 An update on the official Apple website reveals that the unlocked iPhone 4S version of the handset will be available in November. So though the iPhone 4S has gone up for pre-order through Sprint, Verizon Wireless and AT&T, an unlocked variant of the smartphone is slated to toddle in soon anyway.

The Unlocked iPhone 4S, featuring GSM functionality will operate on networks like AT&T in the U.S. Users will have an option to insert a micro SIM card from a local GSM network in their smartphone. Further, this upcoming variant will not work on CDMA networks of carriers such as Verizon Wireless or Sprint.

The handset is currently available for pre-order through selected networks along with a two year agreement. But the new version will not require a contract. Also, it will be out in both black and white color options as well as storage capacities of 16GB, 32GB or 64GB. The iPhone 4S is said to possess world phone capabilities and be compatible with CDMA EV-DO Rev.A, UMTS and GSM/EDGE standards.

Operating on iOS 5, the smartphone is equipped with the A5 processor. It features the intelligent Siri software which touts to understand natural conversation and execute voice commands. Some other attributes include an 8 megapixel camera, iCloud storage and a dual antenna design amongst others.

The unlocked iPhone 4S will be available at its original price. The 16GB variant is marked at $649, while the 32GB and 64GB variants carry price tags of $749 and $849, respectively. It will be purchasable without contracts starting from November this year.