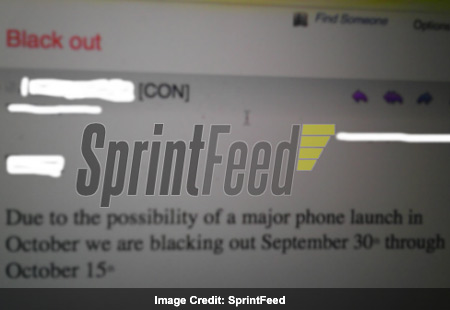 There had been some heavy hinting in the direction of the iPhone 5 coming to Sprint by October 15 previously. It looks like the evidence is only piling up in favor of this rumor about Apple releasing the fifth version of their famed iOS handset mid of next month.

Sprint employees have apparently been passed around an internal memo saying ‘Due to the possibility of a major phone launch in October we are blacking out September 30th through October 15th’. This fresh snippet comes from SprintFeed who has also posted screenshots of the memo in question.

When the carrier talks about ‘blacking out’, they mean time off requests from employees will not be entertained during the stated time period. It’s been speculated that this will give enough time for employee training, release date groundwork and the hullabaloo post sales.

Since Apple would hardly take the trouble to break tradition and slip up on the tech specs, rumored features and wish lists are all that can be scooped up on the new iPhone. The only things we can hope to be sure of point to an A5 dual core CPU, a reworked design, an enhanced camera sensor, the power of iOS 5 and cable-free iTunes.

According to previous reports, October 7 may be too early a date to expect the smartphone. Fans can probably look out for the Apple iPhone 5 getting onto Sprint at a later date during the time off block out period. It’s all unofficial, so take the news with a pinch of salt.