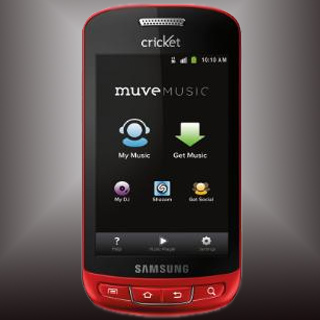 Those who think the Samsung Vitality with Muve Music that’s coming out through Cricket looks familiar may want to check it out on MetroPCs as the Samsung Admire. It was back in December 2010 when the aforesaid unlimited music service was announced to arrive bundled in with the Samsung Suede smartphone.

“We are excited to bring Muve Music to Android on the Samsung Vitality,” said Jeff Toig, general manager of Muve Music for Cricket. “Muve Music is among the fastest growing music services in the U.S. and we believe Muve Music on Android will help further accelerate our growth and help Cricket appeal to music lovers everywhere.”

The Samsung handset sports a 3.5” HVGA touchscreen display on the front and a 3.2MP camera and video recorder on the back panel. It is powered by the Android 2.3 or Gingerbread OS, which means access to the expanding Android Market. An 800MHz processor at its core supplies all the performance steam and there’s support for corporate and personal e-mail services.

Users can look forward to browsing the web at 3G speeds, voice search functionality, stereo Bluetooth connectivity and social networking on the move. What’s more, a Muve Music 4G SanDisk flash memory card with 1GB set aside for multimedia content like photos and videos, is packed into the handset.

Cricket will be offering customers the $219.99, Muve Music infused Samsung Vitality with a $20 instant rebate.