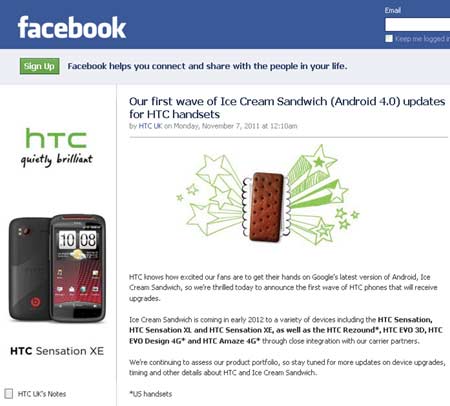 Much to the delight of HTC Android smartphone users, the company has recently announced that a select range of their phones is set to receive an Ice Cream Sandwich update by early 2012. The manufacturer is one of the few handset makers to announce this development regarding the new mobile platform by this point of time.

The line-up of smartphones geared up to feast on the Ice Cream Sandwich OS includes some devices which are available in the UK as well as the U.S. Unfortunately for those residing in other countries, HTC hasn’t come clean on details regarding the mobile update.

The list includes the HTC Sensation, Sensation XL, Sensation XE, and Evo 3D, all of which can be seen in both the UK and the U.S. Handsets to feature on this roll which can be seen only in the U.S. are the Rezound, the Evo Design 4G as well as the Amaze 4G. All of these HTC Android phones currently function on the Gingerbread version of the mobile OS.

The first official device to bring along the Ice Cream Sandwich is the Galaxy Nexus by Samsung, which follows the recent tradition of launching the platform along with a ‘Nexus’ handset by the aforesaid manufacturer. Other than this, there have also been a few headlines about attempts to run the jailbroken version of this mobile platform on other devices.

The Ice Cream Sandwich update for HTC Android phones is not expected until 2012, but the message confirming it should definitely leave people waiting for it, as the Android 4.0 brings along a suite of amusing as well as useful changes. With this upgrade to the OS, Google has not just brought in new features for smartphones, but also finally developed a single, seamless platform for tablets and handsets.

Even as the given list of HTC Android smartphones has been confirmed by the company to be in line for the Ice Cream Sandwich treat, loyalists of other brands can probably hope for the OS to come their way too.