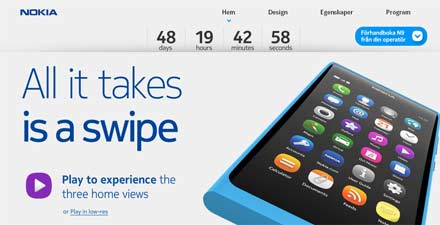 The countdown has begun and the turning point is right around the corner it seems, as the Nokia N9 Swedish website currently flashes the days left for the MeeGo-based Nokia N9 smartphone to hit European markets to be 48. This second-by-second countdown connotes the amount of keenness that is currently surrounding the ‘no-buttons’ handset.

It means that the N9 is supposed to hit Swedish markets September 23. So consumers whining about why the handset is not listed for their country sure have a reason to do so. This new device will come dipped in three shades – cyan, black and magenta. How does a 3.9” curved glass AMOLED screen sound for a display? This smartphone fits in just that on its unibody form factor.

The nonexistence of buttons is a major stand-out for this device. Although, it does lodge the power, volume and camera keys on its edges. If Dolby Headphone and Dolby Digital Plus technologies don’t sound enough, the handset also features NFC capabilities. A stealthily placed 8MP camera scoops up HD videos with 16:9 aspect ratios.

The N9 is all geared up to be the first commercially available MeeGo smartphone, as the the N950 is not considered to be purchase-ready. In this series of firsts, the Finnish giants will soon be launching their maiden Windows Phone nicknamed Sea Ray.

MeeGo-based Nokia N9 smartphone may be arriving in Sweden in 48 days, but what remains to be seen is the release dates which the makers have in mind for the no-so-fortunate parts of the world.