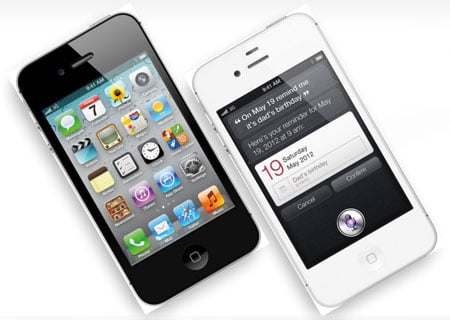 Spot the shoddy ‘Photoshopping’ on the main Apple page honoring the iPhone 4S launch? Putting an end to all the rumor mongering about an iPhone 5 and iPhone 4S, the company finally unveiled the smartphone flush with iOS 5, an A5 chip, iCloud, an 8MP camera and Siri at their Cupertino HQ.

It may be a wee bit disappointing for those who were expecting radical changes in the new iPhone considering the number of improvements it’s been given. Measuring 4.5” x 2.3” x 0.3”, it sports the same 3.5” 960 x 640p Retina display with multi-touch support. The camera is now an 8MP AF snapper with LED flash and capable of 1,080p video capturing, as opposed to the 5MP one with LED flash on the previous generation device.

But the highlight is the Siri software which is being touted as an intelligent assistant that can take hints from natural conversation. Apparently, if users ask a question like ‘Will I need an umbrella this weekend?’, Siri is capable of figuring out that it’s the weather forecast they’re looking for. The utility can even work around instructions like ‘Remind me to call Mom when I get home’.

Sounding deliciously like something out of a sci-fi movie, voice-based functionality is the kind of fluff Android’s familiar with already. But maybe not as familiar as we’d like it to be. Hopefully, Siri has been blended into the iPhone experience in a more intuitive manner. Apart from routine functions like searching the web, sending texts and so on, the software can also deliver traffic information for the user’s current location on being asked ‘What’s the traffic like around here?’

Some of the other features which should be of major interest to users cover integrated Twitter and iMessages courtesy of iOS 5, iCloud, access to the camera via the lock screen and up to 8 hours of 3G talk time. The iPhone 4S sports an enhanced stainless steel external, dual-antenna design that switches between two antennas to send and receive. Additionally, Apple will be selling it in black and white color options.

The U.S. launch date for the iPhone 4S is marked at October 14, though pre-orders will be accepted starting from October 7. It will be vended through the Apple Online Store, Apple’s retail stores, AT&T, Sprint, Verizon Wireless and select Apple resellers. The prices for the 16GB, 32GB and 64GB versions read at $199, $299 and $399.