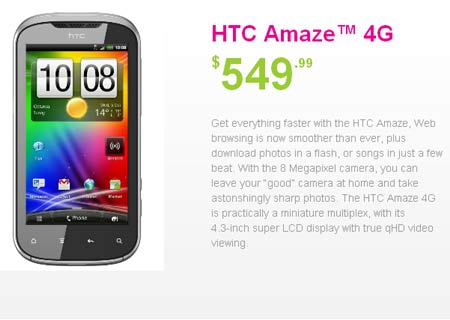 Accompanying the all-touch BlackBerry Curve 9380, the HTC Amaze 4G smartphone has also made its way onto Mobilicity in Canada. The company is offering this device with a 50% discount on the $10 data pack and regular monthly plans for a period of up to a year.

Powered by a 1.5GHz dual core processor, the smartphone comes bearing a 4.3-inch LCD touchscreen and the Android 2.3 OS for better web browsing and advanced multitasking between applications. When it comes to features, the handset sports a clear front-facing 2MP camera as well as HD video calling and an 8MP rear facing one with LED flash for recording HD movies. Besides these, it packs in the HTC Sense UI and is hotspot compatible through the company’s unlimited data plan.

The smartphone arrives with various other functions like the ability to create different user profiles, high integration of social networking services from Facebook, Twitter and Flickr as well as multiple email accounts support that helps users keep track of different IDs through email filters. Also, on receiving a call, the handset can be silenced by simply flipping it over. For added convenience in capturing content, the device sports two keys, one for photos and the second for camcorder mode. Previously, the HTC Amaze 4G debuted on T-Mobile with access to the company’s HSPA+ network for high speed data downloads.

The Moblicity HTC Amaze 4G price amounts to $549.99 and it is available through the carrier’s stores in Canada. Furthermore, the company offers all devices without any contract-based service plans.