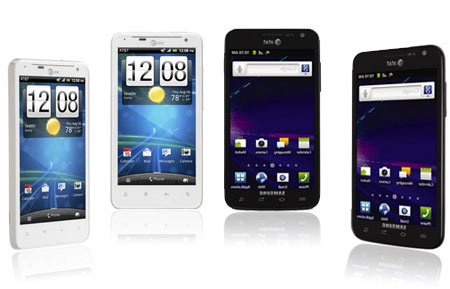 AT&T continues to expand its portfolio of smartphones through the launch of the HTC Vivid and the Samsung Galaxy S II Skyrocket that are also stated to be the first to operate on the carrier’s LTE 4G network. These devices will be added to the current lineup of 20 4G-enabled handsets, bringing the total to 22 for the year 2011.

Hosting a 4.5-inch qHD LCD touchscreen with a resolution of 540 x 960 pixels, the HTC Vivid smartphone comes with a 1.2GHz dual core processor and operates on the Android 2.3.4 Gingerbread operating system. It also sports an 8MP rear-facing camera with an f2.2 28mm wide angle lens for capturing images in low light conditions and full HD 1080p video recording capabilities at 60fps. Additionally, the handset lands with 16GB of built-in memory which can be further expanded up to an additional 32GB via the microSD slot.

David Christopher, chief marketing officer, AT&T Mobility and Consumer Markets commented, “The two LTE-powered superphones will be our 20th and 21st Android devices in 2011, adding to an outstanding year of Android success. We’ve far exceeded our commitment to offer 12 new Android devices this year –now including our first 4G LTE smartphones. We’re delivering an incredible amount of innovation to our customers, which is a huge reason why more than half our post-paid subscribers are using a smartphone.”

The other device to run on the company’s LTE network, the Android 2.3.5-powered Samsung Galaxy S II Skyrocket smartphone is equipped with a 4.5-inch Super AMOLED Plus display portraying resolutions of 800 x 480 pixels. Bundled with a 1.5GHz dual core processor, the handset embeds a 2MP front-facing camera as well as an 8MP rear-facing one with LED flash and 1080p video recording. Storage-wise, it holds 16GB of built-in memory and a microSD card slot for expansions of up to 32GB.

With data plans starting as low as $15 per month, users can choose between DataPlus which provides 200MB of data for $15 or DataPro for 2GB data usage at $25 per month. Additionally, an extra GB of data can be added to the latter for a price of $10. Users who wish to share their connection as a mobile hotspot can go for the DataPro 4GB which is priced at $45 per month. Currently, all plans include access to the company’s Wi-Fi network of more than 29,000 hotspots.

The AT&T HTC Vivid and Samsung Galaxy S II Skyrocket price tags read at $199.99 and $249.99, respectively. Both devices will be available with a two year contract starting November 6.