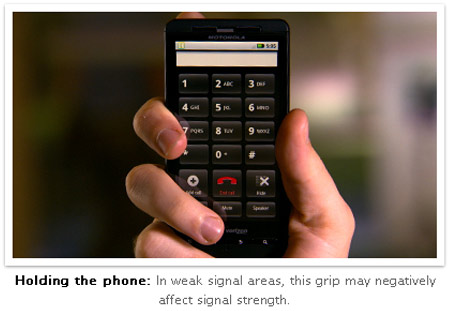 RIM’s displeasure with Apple for pulling the BlackBerry Bold 9700 into its antenna performance ring hasn’t stopped the latter from bringing two more phones into the picture this week. The Motorola Droid X and Nokia N97 mini are up on Apple’s web page dedicated to the iPhone 4’s antenna attenuation issues.

Some may venture to say that it’s free publicity for the Nokia N97 mini and Motorola Droid X on Apple’s very own pages. Unlike RIM, none of the other concerned companies have responded to this as yet. Apple claims that their tests resulted in the Motorola Droid X dropping from three signal bars to nil when gripped in a manner that interfered with its reception.

The N97 mini is also shown to drop from seven bars to two when grasped in a way that attenuated its signal. These results are compared to the iPhone 4 losing two signal bars when held in the wrong manner. Why does it feel like Apple is not afraid of inviting the ire of competitors in order to bolster the iPhone 4’s image in the eyes of current and potential customers?

Word is that Motorola has already had a stab at the Apple device’s signal issues in one of the Droid X’s advertising campaigns that stresses on its double antenna design which permits users to hold the phone in any way without dropping signal bars.