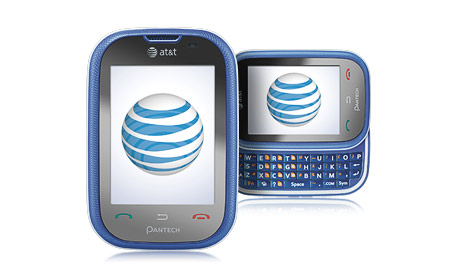 Teenagers form a huge segment of mobile phone consumers all over the world. Characteristic of their ages, their demands change from time-to-time and revolve around a fully-featured phone with superior design and style. To capture teens with such requirements, Pantech has launched its touch messaging phone namely Pantech Pursuit through AT&T. The phone manufacturer aims to target teenagers and other potential customers in their 20s in the US.

The manufacturer focuses on the design and colors of the device. The phone will be available in blue and green color. The company conducted a consumer survey in the US which revealed that blue is preferred by young minds and the color green is associated with ecological inclination. This made both these colors the ideal choice for Pursuit.

The front part of the device is impressed with recurring net patterns on the borderline while the rear is endowed with circular designs. This not only adds to its stylish appearance but also makes it easy to hold. The convenience offered by the phone is also reflected through its QWERTY keyboard. The company claims that its embossed design makes texting simpler and faster for users.

Managing Director Seong-Jae Lim, the head of Pantech’s Overseas Marketing Division remarked, “Pursuit is a touch phone with unique ‘colors’ for the new generation, and it offers an easy, convenient and fun user experience by improving the convenience of use. Starting with the Pursuit, we will win over the overseas touch phone market by capitalizing on the Pantech-specific unique sense and superb technological ability.”

The company has maintained that it has developed a separate user interface design to include both the QWERTY keyboard and touchscreen features in the mobile phone. To enhance messaging features of the phone, it has been developed in such a manner that every time the user pulls out the keyboard to send a message, options such as messaging and e-mail automatically flash on the screen. In addition, whenever the QWERTY keyboard is pulled out and pushed in, the screen will switch its horizontal and vertical orientation without any hassles.

To make the phone a perfect zingy choice for its target audience, it is embedded with fun features such as Drawing Commander and Face Tagging. The former facilitates users to store and access various functions by pre-saving signs made with the finger on the screen. It enables users to easily make a call or play music with the help of simple gestures associated with such activities. The latter function has been claimed to help users to store information such as name and telephone number along with the picture of a given person clicked on the phone’s camera. By simply touching the face set offered by this function, users can make calls.

The phone also supports threaded SMS and enables users to exchange messages even while reading previous dialogues. This facet is expected to provide users with a messenger program like service. The Video Share function on the phone can be used to spread information and details about one’s whereabouts even when the user is on a call. In addition, the phone also supports a microSD card.

The standby screen has been designed to showcase three sections. Each of these sections, that is, left, right and center have separate themes and the division makes it easy for the user to handle the touchscreen interface. The Central section of the standby screen provides a basic screen which flashes functions such as clock, calendar, and music controller. The left screen helps the user to access menus such as memo and calculator. Telephone books, photos and music can be brought to use from the right screen. It also offers to verify and recommence applicable contents easily.

The availability and pricing information has not been disclosed yet.