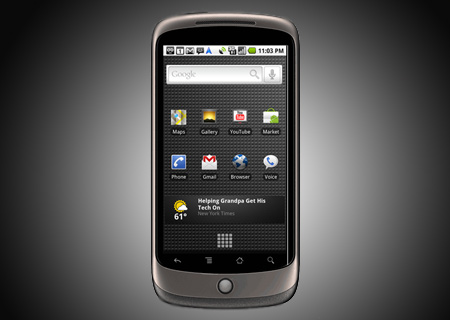 Yes, it’s finally out. The official Google blogspot has announced the launch of their much publicized Nexus One phone running on Android 2.1 a.k.a. Eclair. It’s still left to see if the device lives up to the hype it generated over these past few weeks of speculation. There are probably a lot of people anticipating amplified Android presence in the market with this new release.

Apart from the expected Android 2.1 software, Nexus One houses a 1GHz Qualcomm Snapdragon chipset. It features a 3.7″ WVGA AMOLED touchscreen that displays content in resolutions of 800 x 480p with a 1,00,000: contrast ratio and 1ms response rate. Photos can be snapped up with a 5MP AF camera that offers 2 x optical zoom, geotagging and LED flash. Video may be recorded in resolutions of 720 x 480p at 20fps.

Nexus One comes powered by a 1400mAh battery that extends 7 – 10 hours of talktime and 250 – 290 hours of standby time. The location-based properties are cited as AGPS, digital compass, cell tower and Wi-Fi positioning. This 119mm x 59.8mm x 11.5mm device tips the scale at 130g. It may be purchased from the official Google website at $529 without a service plan.

T-Mobile is offering Nexus One on a two-year contract basis at $179 to new clients, $279 to current patrons who are adding data plans and $379 to existing customers who are upgrading their data service plans.